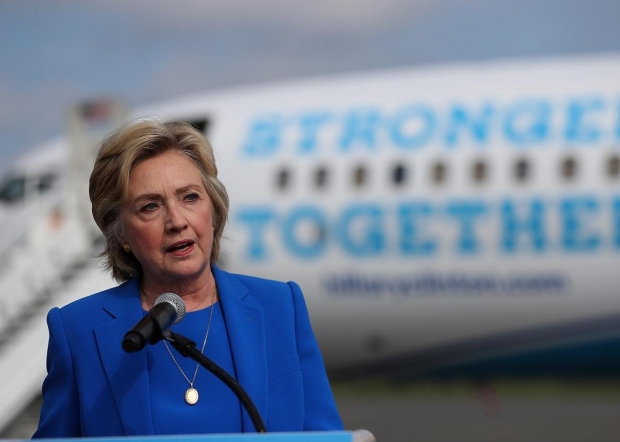 At a fundraiser Friday night, Hillary Clinton said, "You know, to just be grossly generalistic, you could put half of Trump’s supporters into what I call the ‘basket of deplorables'… Right?The racist, sexist, homophobic, xenophobic, Islamophobic — you name it.” Several days later, this story is still generating strong reactions on both sides. Was her comment unfair and insulting and will it “cost her at the polls,” as Trump tweeted, or was it about “calling out bigotry and racist rhetoric in this campaign,” as Clinton said the next day? Today we bring you a cross-section of viewpoints on this story.
Also, our contributions to the Christian Science Monitor's Politics of US series continues with this week’s edition, The Shrinking Middle Class. Check out different perspectives on the hot-button term “inequality,” our dialog tools, an AllSides lesson plan for student discussions, and more.
See other news featured by AllSides such as Latest Polls Show Tight Race, Colin Powell on Donald Trump, Colin Powell on Hillary Clinton and the latest AllSides News.
Snippets from the Right
OPINION: ’Basket of deplorables': For once, Hillary told the truth about what she really thinks
Fox News
“Everything I love -- and millions of conservatives, Christians and patriots love -- is under attack from Hillary and the Democrats. They resent us. They disrespect us. They want to silence us. They want to financially cripple us (to redistribute our income in the name of ‘fairness’ and ‘social justice’).
Millions of Trump supporters believe the things that made America great are simple: Faith in God, family, patriotism, American exceptionalism, capitalism, Judeo-Christian values, Constitution, military and police. But Hillary and the Democrats despise those symbols. To them, belief in those symbols makes you…’deplorable.’”
Snippets from the Left
Do Half of Trump’s Supporters Really Belong in a “Basket of Deplorables?” Yes.
Slate
“By sizable margins, according to McElwee’s analysis of ANES [the American National Election Study], Trump supporters are more likely than non-Trump supporters to believe that blacks, Hispanics, and Muslims are lazier and more violent than whites. More than 60 percent of Trump supporters believe black people are more violent than whites; nearly 50 percent of non-Trump Republicans say this. More than 70 percent of Trump supporters believe Muslim people are more violent than whites; roughly 60 percent of non-Trump Republicans say this. These are deplorable views, and they represent the consensus opinion not just of Trump supporters but of all Republicans in the survey. If the study is at all reflective of the population at large on this score, we’re going to need a bigger basket.”
Snippets from the Center
Clinton's 'deplorables' slip: 2012 campaign hints it's not a game-changer
Christian Science Monitor
“Lots of pundits are comparing it to Mitt Romney’s famous ’47 percent’ statement, in which he said nearly half of American voters can be written off as welfare moochers.
…What’s the takeaway from this? Maybe that lots of things the media says are game-changers, aren’t.
It’s certainly possible that Clinton’s ‘deplorables’ comment could hurt her. Insulting ordinary voters is not something campaign consultants generally urge. But in general presidential races are not unstable. Leads shrink or widen slowly, driven by fundamentals such as the state of the economy, or predictable dynamics such as Republican voters rallying around Trump. At this point in the cycle, many people’s minds are set, and it takes a lot to change them.”
Discover more on this topic on AllSides.
News, Story Of The Week, Hillary Clinton