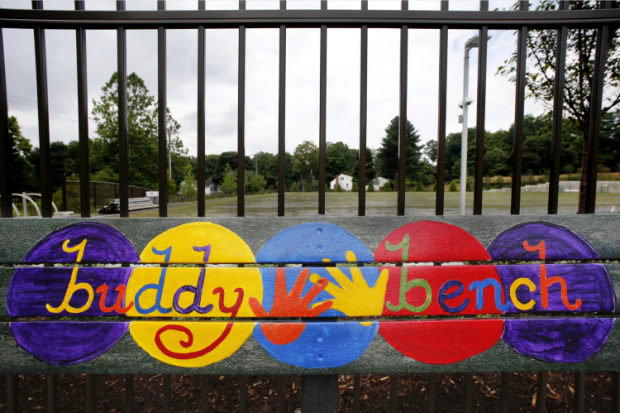 A playground bench is colorfully decorated at the new Sandy Hook Elementary School, which replaced the one torn down after a gunman killed 20 first graders and six educators in 2012. AP Photo/Mark Lennihan

This piece originally appeared on The Conversation, which AllSides rates as Lean Left. It was written by Dimitris Xygalatas, an Associate Professor of Anthropology and Psychological Sciences at the University of Connecticut. The writer's bias has not been rated.

After the recent shooting in Robb Elementary School in Uvalde, Texas, which claimed the lives of 19 children and two teachers, some local residents want the school demolished. Texas state Sen. Roland Gutierrez said that President Joe Biden has offered to help the school district secure a federal grant for the building’s demolition.

This is not uncommon. In numerous similar cases, buildings were knocked down, abandoned or repurposed in the aftermath of a tragedy. After the Sandy Hook massacre of 2012 in Newtown, Connecticut, that school was destroyed and rebuilt on a different spot on the same property, at a cost of US$50 million. And in 1996, the town of Gloucester in England bought the house where a couple, Fred and Rosemary West, raped, tortured, and killed 12 young women. The town razed the property to the ground, burned all timber, pulverized each brick and dumped the debris at a secret location before turning the lot into a park.

At a visceral level, this seems obvious: Most people would be uncomfortable carrying on business as usual at the site of a bloodbath. But as an anthropologist who studies some of the most meaningful human experiences, I know that human reactions that feel obvious may often be hard to explain. Why would tearing down and rebuilding it make the situation any better? The answer lies in human psychology.

Research suggests that we, as humans, are natural-born essentialists. That is, we intuitively think of objects as having certain immaterial inner qualities or essences, which can be transmitted through contact. For instance, participants in an experiment conducted by psychologists Carol Nemeroff and Paul Rozin refused to wear a sweater that belonged to a serial killer, although they were happy to wear an identical sweater that belonged to someone else.

These intuitions can be observed outside of the laboratory as well. For instance, a study conducted in Hong Kong looked at the effects of death on real estate prices. As it turns out, when a murder, suicide or fatal accident occurred in a house, its market value decreased by as much as 25%, and even nearby properties lost part of their value.

Early anthropologists described this as a form of “magical thinking.” Scottish anthropologist James Frazer argued that this type of reasoning rests upon two basic principles common in all human societies. The first is the “law of similarity,” the idea that physical resemblance implies some deeper connection. This explains the belief found in many cultures that stabbing a doll that resembles a person could cause harm to that person.

The second principle is what Frazer called the “law of contagion.” It states that when two things come into contact, they transfer part of their properties to each other. This is why John Lennon’s piano sold for over $2 million, and why U.S. Rep. Bob Brady took the glass of water from which Pope Francis had drank during a 2015 address to the U.S. Congress and later shared it with his family. The assumption is that some of the qualities of the person who once came in contact with the object will rub off. “Anything the pope touches becomes blessed,” Brady said.

If these beliefs and behaviors are based on mistaken premises, should we humor them, or should we dismiss them as irrational? Once again, human psychology might provide the answer.

The power of symbolism

We are a symbolic species. We experience things around us based not simply on their physical properties. We care about where they come from, their histories, their connections and what they stand for. This goes beyond what we think about those things – it also affects how we interact with them.

Psychologists George Newman and Paul Bloom designed an experiment to see whether beliefs about an object’s contagiousness could be altered. They asked people how much they would pay to purchase a sweater previously owned by a beloved celebrity. As they expected, most were willing to shell out substantially more than what a brand-new sweater would cost.

But here is the twist: When told that it would be thoroughly washed before being handed to them, people were less interested in buying the sweater. Inversely, when the researchers asked them the same question about a famous person they despised, participants were willing to pay a higher price after the item had been sterilized. It appears that physical purification would be perceived as removing part of the sweater’s essence.

Cultural traditions around the world tap into these intuitions to soothe people’s fears and anxieties. In some cases, washing the body is meant to cleanse the soul, which is what happens in baptisms. In other cases, purification comes through the destruction of the evil substance or its proxy.

On New Year’s Day, people in various parts of Latin America build life-size effigies, or “muñecos,” that resemble wicked things and persons: corrupt public officials, villains, personal foes and even the coronavirus. Then they set them ablaze. Their demise is meant to exorcise their polluting power and symbolize hope for the coming year.

Since these practices rely on universal parts of human psychology, they make sense to people who are not religious too. Take, for example, the attendees of Burning Man, an annual festival in Black Rock Desert in Nevada. Ostensibly, this is a crowd as secular as they come: only 5% of them self-identify as religious. Yet thousands of people flock to a makeshift temple where they leave memorabilia related to some of their most traumatic experiences. They then gather to watch the temple burn to the ground, many of them in tears, carrying all the bad memories with it.

There is a powerful cathartic aspect to those purification rituals. Symbolic gestures often speak to our psyche in ways no rational action could ever speak to our intellect. In times of tragedy, it is important to acknowledge this fundamental aspect of our humanity. For even as the pain remains, the knowledge that a tangible reminder of it has been undone can be soothing.