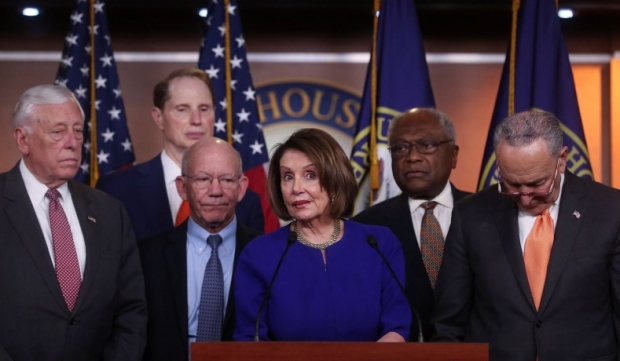 Calls for President Trump's impeachment are growing among House Democrats with the addition of Rep. Justin Amash, the first Republican congressperson to signal support for the move.
Although the Mueller report did not find evidence of Trump-Russia collusion during the 2016 campaign, some say that his findings show that Trump obstructed justice, as the report alleges that the president attempted to interfere in the investigation via his close associates. Others argue that the case as it stands does not merit impeachment, with many cautioning that it would be a politically damaging move for Democrats.
Check out some other big stories this week: McConnell, Kaine Team up in Bipartisan Effort to Raise Tobacco Age to 21, Blue States and Counties Sue Trump Administration Over Religious Protections of Health Care Providers, and US Lifts Steel and Aluminum Tariffs on Canada and Mexico.
From the Blog: Is CNN Fake News? People from all sides of the political spectrum believe fake news is bad for the health of democracy. Some, including the President, have accused CNN of being fake news. What even is fake news, and how can we spot it?

For Democrats, the Party’s Over
National Review
"Their attempt at regicide has failed completely; it’s still a bit of a long shot, but they might just manage suicide, not from justified conscientious shame, but out of witless antagonism. One way or the other, the papier-mâché Damoclean sword of impeachment will disintegrate just as the prominent Democrats who grievously abused their offices in trying to destroy Trump get ready for their own trials. Both sides come to bat in this legal game, and the Democrats have struck out."
The Impeachment Democrats
Wall Street Journal Editorial Board
"But Mrs. Pelosi is facing a momentous choice. If she opens a formal impeachment inquiry, the momentum toward a vote would be hard to stop. Her moderates would be squeezed to take a vote that could cost them re-election. The process would consume media attention for as long as it lasts and well into next year. Forget about what Mrs. Pelosi calls 'our agenda for the people.' The new House majority will define themselves as the Impeachment Democrats.”
Justin Amash Is Right About Impeachable Conduct
Reason
"The fact that Trump's frequently clumsy efforts to impede federal investigations were mostly unsuccessful (mainly because of resistance by his underlings) does not get him off the hook, since attempted obstruction is also a crime. Nor does it matter that Mueller ultimately found no evidence that anyone in the Trump campaign illegally conspired with Russian agents. Trump himself did not know the answer to that question in advance, and in any case he may have been motivated by a desire to prevent revelations that could prove embarrassing and politically damaging."

Trump Scorches Democrats As Pelosi Broaches Prospect Of 'Impeachable Offense'
NPR News
"The president was the first to appear after the session in a Rose Garden availability that he used to renew his call for Democrats to abandon investigations into him if they want to negotiate over improving the nation's roads and bridges or other legislation.
'I told the Democrats ... I want to do infrastructure,' Trump said. 'I'd be really good at that. It's what I do. But we can't do it under these circumstances. Get these phony investigations over with.'"
Amash: Some of Trump's actions 'were inherently corrupt'
The Hill
"Amash, who made headlines Saturday when he became the first Republican lawmaker to say Trump engaged in “impeachable conduct,” said special counsel Robert Mueller’s report showed Trump sought to impede his investigation into Russia's election interference."
The drumbeat for impeachment is growing. Can Nancy Pelosi stop it?
The Christian Science Monitor
"She’s called the move divisive. She refused to budge even as rumblings grew among House Democrats that special counsel Robert Mueller’s report had enough to start impeachment proceedings against Mr. Trump on obstruction of justice grounds. On Monday night, Ms. Pelosi told Democratic leaders that impeachment would take away from the party’s legislative agenda and undercut ongoing investigations into the president by other congressional committees."

Impeaching Trump Is Risky. So Is Refusing To.
New York Times Opinion
"The point of impeachment is not to remove Trump before the 2020 election. It is to make clear, in the starkest possible way, why Democrats believe he should be removed. The remainder of his term should be consumed by a formal, televised presentation of all the ways he’s disgraced his office. It’s true that were Trump to be re-elected after such a reckoning, he might be even further unleashed. But were Trump to be re-elected in the absence of impeachment, it would still be seen as a vindication for him, and would leave Democrats humiliated by their excess of caution."
Holding Trump accountable is a pocketbook issue
Vox
"The instinct to want to focus on policy issues that impact people in their everyday lives and not just the constant din of Trump scandals is sound. But the line between Trump scandals and systematic policy failure is a blurry one because Trump’s entire career has been a scandal-soaked policy failure."
Justin Amash's impeachment call puts the Constitution ahead of Trump
CNN Opinion
"Amash is right. You don't need to have a Ph.D. in political science to understand that if elected officials blindly defend the actions of a president simply because they are in the same political party, it's a prescription for disaster for our nation. That is the very definition of putting politics before our Constitution."
Discover more on this topic on AllSides.
Politics, US House, Nancy Pelosi, Justin Amash, Impeachment, Story Of The Week, News