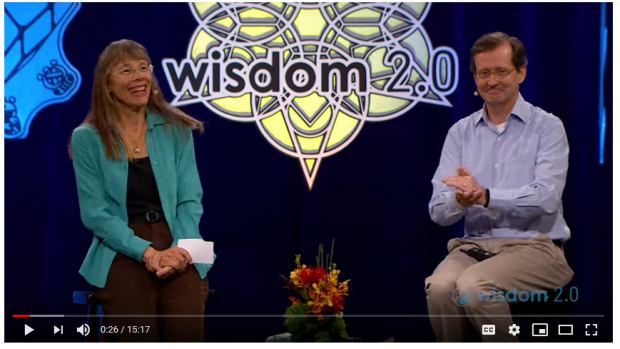 Last year, Joan Blades and I spoke at the Wisdom 2.0 conference in San Francisco, an inspiring event that merges mindfulness and ageless wisdom with modern technology and society. It was an extraordinary event and going on again right now. I highly recommend it.

Being the lone Republican on the main stage at a very progressive event, at one point I got booed. It seemed (at least mostly) in good fun. I certainly took it that way and truly enjoyed my time there and every person I met. More than that, the event and the people there inspired me.

But hearing from people at the conference immediately after our talk made me realize that the boos reveal a deeper problem, one that is particularly worth noting within the mindfulness community that generally prides itself on being accepting of a large diversity of people. This recent blog post from an attendee of Wisdom 2.0 conference got me thinking about this again.

Here is what happened.

I was invited to speak about Celebrating Political Diversity alongside Joan Blades, AllSides for Schools co-founder and a progressive from Berkeley. What a fantastic opportunity for us to share our passion, bridging divides across differences for a better, stronger and more peaceful world.

Recognizing that I was speaking in an extremely progressive environment — something I do often and enjoy – I started by saying how I was a Republican from Kentucky and how I used to work for someone that everyone there surely loves, Mitch McConnell, and that believe it or not, even though I live in San Francisco, I am still a Republican! It’s fun to put everyone at ease with a little openness and humor, and it went well, with people laughing and some even having extra fun with it by booing. I thought it was great.

Watch our 15-minute Celebrating Political Diversity speech at Wisdom 2.0 here to see for yourself. Joan and I both had a good time and were appreciated by the audience.

Then something unexpected happened. I couldn’t walk 30 feet without someone stopping me to talk to me or even to thank me. One of the most inspiring speakers of the night who received a standing ovation told me how grateful her mostly conservative family that attended were, how they had felt ostracized at first but then felt welcome just because of me. One man said he’d been coming to the event for years and, as a conservative, this was the first time he felt comfortable. He pulled me to the side so other people couldn’t hear him, but it’s something I heard all night long after my speech, and the next day as well.

Then I started to notice more. An author and Buddhist teacher who was leading the audience in some mindfulness exercises made a joke on stage about President Bush being stupid. I often say I’m “chronically unoffended,” so usually I don’t think much about stuff like this, but how would this make outsiders feel? I’m used to progressives who are concerned about microaggressions being blind to their own demeaning behavior (they have a good point about the demeaning language used by many conservatives and leaders), but it was surprising to hear from a leader in mindfulness.

Everybody’s goal at Wisdom 2.0 is to be open and welcoming to all perspectives, and they proved that by inviting Joan and me, and by how well they treated us. Even great groups and leaders can fall short. Brandon’s blog raising concerns about the boos was not to diminish or take a cut at this fantastic event, but an opportunity to learn and grow for all of us. I’m sure the leaders at Wisdom 2.0 see it that way too.

For the people at the event (taking place now through March 8th, get your tickets here), have another wonderful experience and thank you for all that you have personally shown me.

John Gable is the President and co-founder of AllSides. He has a Lean Right bias.