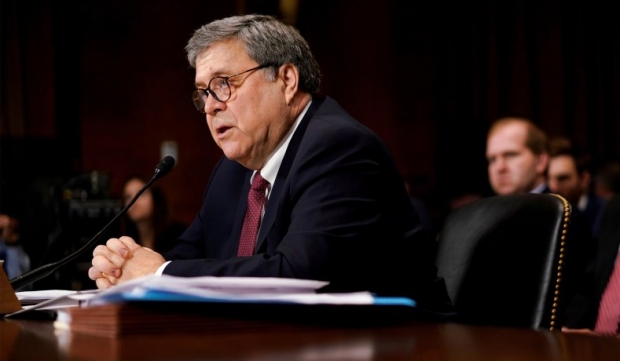 Attorney General William Barr testified in front of the Senate Judiciary Committee on Wednesday, engaging in several tense exchanges with Democratic senators who accused him of obscuring special counsel Robert Mueller's findings and covering for President Trump.
Some harshly criticized the idea that Barr engaged in a cover-up, noting that he released the full Mueller report on Russian election interference with minimal redactions. Others point to a letter that Mueller sent Barr in which he accused the attorney general of failing to fully summarize his findings, particularly as they related to whether or not Trump committed obstruction of justice.
Barr declined to testify a second time in front of the U.S. House Judiciary Committee, citing his objection to answering questions from staff lawyers.
Check out some other big stories this week: Facebook Bans Alex Jones, Milo Yiannopoulos, Paul Joseph Watson and Others It Calls "Dangerous Individuals", Rabbi Speaks Out After Synagogue Shooting In San Diego, and Trump Announces US is Leaving Arms Trade Treaty.
The AllSides Red Blue Dictionary is now available on Credo Reference, an information skills solutions provider that serves libraries worldwide!
We're hiring! AllSides is looking for a data journalist and analytics guru. Learn more and apply here.

The Incredibly Dumb Bill Barr Scandal
National Review Editorial Board
"It’s hard to know where to begin. Barr’s position was eminently reasonable. He wanted to get the basic verdict of the Mueller report out as quickly as possible, given the inherent interest in the question of whether the president of the United States had conspired with the Russians. He opposed the subsequent release of the summaries of the report, as suggested in Mueller’s letter, because he thought it better that the public get the entire report at once. Which it did. Democrats and the media are acting as if Barr engaged in some sort of cover-up, when he went further than required under the regulations to release all of the report with minimal redactions."
Rep. Doug Collins: House Dems torpedo Barr hearing, pretend to pursue impeachment without taking the plunge
Fox News Opinion
"I implore my colleagues to abandon hollow theatrics and return to legislating. House Judiciary Committee members should examine the report provided by the attorney general, ask earnest questions, and heed the pleas of hardworking Americans who understand that our time is better spent making progress than chasing ghosts.”
Lindsey Graham Continues To Demonstrate Everything That's Wrong With Republicans in the Age of Trump
Reason
"Graham's 'evolution' during the Trump years has been more dramatic than most, but his performance on Wednesday was on par with how many other Republicans have handled the explosive details in the Mueller report. Instead of using his immense power as the chairman of a powerful Senate committee to determine whether Trump's presidency should continue, or at least to get straight answers about why Barr apparently misled Americans about the content of Mueller's report, Graham is now making a show of rolling over for a president that he once said was a 'kook' and 'unfit for office.'"

Attorney General Barr defends handling of Mueller report amid furore
BBC News
"The attorney general, the nation's top legal official, testified for the first time on Wednesday since releasing Special Counsel Robert Mueller's 448-page report, which found there was no collusion between Russia and President Donald Trump's campaign in the 2016 election.
But the report did not exonerate the president of obstruction of justice in his alleged attempts to undermine Special Counsel Mueller.'"
William Barr, Democrats Clash Over Robert Mueller’s Report
The Wall Street Journal
"Wednesday’s Senate hearing offered a dramatic public display of the behind-the-scenes jockeying to give Mr. Mueller’s findings their proper airing. It came just after the Justice Department released a March 27 letter from Mr. Mueller to the attorney general, saying Mr. Barr’s early public portrayals of the report’s main conclusions failed to fully capture the work of the special counsel’s office."
Lawmakers clash as Attorney General William Barr skips House hearing on Mueller report
USA TODAY
"The clash marked the latest confrontation over congressional investigations into Trump and his administration. Lawmakers contend they are being stonewalled across a variety of inquiries by an administration that ignores subpoenas and avoids testimony, but Trump says the partisan requests are presidential harassment."

Bob Mueller’s Extraordinary Letter to Bill Barr
The New York Times Editorial Board
"The special counsel notes in his letter that just a day after Mr. Barr’s effort to spin the findings of the investigation (which Mr. Trump crowed was a 'Complete and Total EXONERATION'), Mr. Mueller raised 'concern' about all the confusion and misreporting that the attorney general had caused."
William Barr torched his reputation. His testimony compounded the damage.
The Washington Post Editorial Board
"Mr. Barr defended himself Wednesday by insisting that his memo, publicized weeks before he released any additional material, was technically accurate, despite the fact that his spin deeply affected the reception of Mr. Mueller’s full report when the public finally got it. It was not supposed to be a full summary of the special counsel’s report, he insisted — just a brief explanation of the top-line conclusions. Mr. Barr’s long history in Washington belies his argument: He should have known how his pre-spinning of the Mueller report would distort the truth of the special counsel’s damning findings to the president’s benefit. He did it anyway."
What's next in the battle of Barr v. Congress
CNN Opinion
"Indeed, Barr offered next to nothing to justify his dramatic conclusion that Trump never obstructed justice. When pressed on one of the most flagrant examples of obstruction -- Trump's instruction to then-White House Counsel Don McGahn to have Deputy Attorney General Rod Rosenstein fire Mueller -- Barr resorted to a perplexing claim that Trump merely wanted McGahn to discuss Mueller's conflict of interests. Yet Mueller himself finds in the report that Trump, through McGahn, made "efforts to remove" Mueller, and told McGahn that Mueller "must be removed." Again: this is the top prosecutor in the United States, not a sneaky defense lawyer out of 'Better Call Saul.'"
Discover more on this topic on AllSides.
US Senate, William Barr, Robert Mueller, Russia, Russia Probe, Donald Trump, Story Of The Week, News