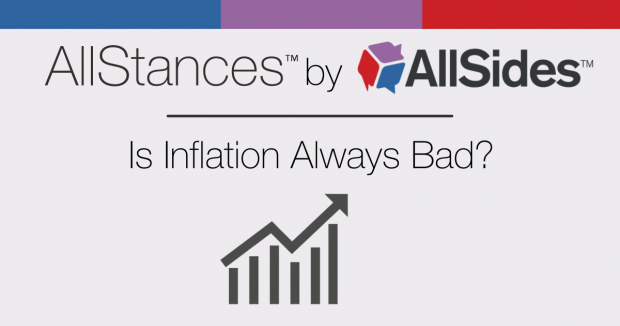 Is inflation always a bad thing that hurts consumers? Or can there be some potential benefits when it’s being controlled at a moderate level? Is the alternative to "inflation/high inflation" totally static prices, or is it predictable 2% inflation?

Explore all opinions, perspectives, stances, and arguments about inflation with AllStances™ by AllSides.

Inflation occurs when prices increase over time throughout an economy. This acts like a tax on everything, meaning each dollar buys less than it did earlier. When prices decrease, as they did during the 2008 recession, it is called deflation. This encourages people and businesses to not spend anything since money will be worth more later.

Over the last several years, there have been very low inflation and low-interest rates which both encourage businesses to invest.

Inflation is most commonly measured by the Bureau of Labor Statistics' Consumer Price Index, which measures a wide range of consumer goods and services across the country.

By a large margin, Americans see growing inflation as the biggest issue in 2022. According to data from Pew Research Center, 70% of Americans view inflation as a very big problem for the country.

When it comes to assessing the effects of inflation, however, concerns differ across party lines. According to a Mar. 2022 poll from Gallup, 79% of Republicans said they worry "a great deal" about inflation, compared to 35% of Democrats.

While some progressives stand by the Federal Reserve's target of 2% inflation, some conservatives believe that the Fed should lower inflation to avoid rising unemployment and interest rates.

Explore the most popular stances and perspectives on inflation along with their supporting arguments. Note that none of these stances support high inflation – there is widespread agreement that high inflation is a problem, though disagreement on how best to address that problem. (Keep in mind that stances aren't mutually exclusive — some viewpoints might align with multiple stances.)

Stance 1: Moderate Inflation Can Have Positive Effects on the Economy

CORE ARGUMENT: Meddling with the natural course of inflation on an aggressive level can be harmful.

Stance 2: Inflation is a Big Consumer Issue, But Shouldn’t Always be a Priority Over Other Economic Matters

Stance 3: Inflation is a Bad Thing and Should Be Aggressively Combatted

CORE ARGUMENT: Allowing inflation to persist prevents the economy from flourishing and can be a serious burden on all Americans.