A barrage of Russian missiles in the southern region of Zaporizhzhia struck an apartment block on Thursday, killing at least three civilians. The strike has been labeled a war crime by Lesia Vasylenko, a Ukrainian MP. “They are targeting civilians,” Vasylenko said. “Every time they target civilians is when they cannot get any advancement on the military front. So they shift to the strategy where they are trying to break the morale of the people.”

Zaporizhzhia is one of the four regions Russian President Vladimir Putin formally annexed following a referendum denounced by Western Europe and the United States. Ukrainian forces made gains in the region recently, prompting retaliatory attacks from Russia. Zaporizhzhia contains the largest nuclear plant in Europe, and has been a continual topic of concern throughout the war, as Ukraine and surrounding nations fear the consequences of a nuclear meltdown triggered by a wayward missile striking the facility. On Wednesday, Putin signed a decree declaring Russia’s ownership over the power plant, which Moscow forces have occupied since March. The plant’s last reactor was shut off in September.

Media outlets across the spectrum are still working towards a consensus on how to write about the regions Russia declared it annexed. Fox News (Right Bias) put the word “annexed” in quotation marks along with the word “liberated” when referring to Ukrainian victories. The Associated Press (Lean Left Bias) categorized them as “illegally annexed.” Newsweek (Center Bias) labeled them regions that Putin “declared Moscow had annexed.”

Residential buildings were hit in the regional capital killing at least one and trapping at least five in the rubble, including a 3-year-old.

"Preliminary data on victims of the enemy attack. One woman was killed. There are at least five people under the rubble of houses," Head of the Zaporizhzhia Regional Military Administration, Oleksandr Starukh, said on Telegram. 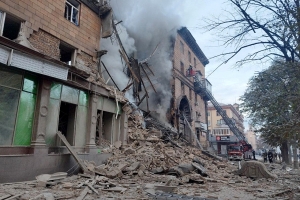 A Ukrainian MP said that a missile strike on an apartment block in the southern city of Zaporizhzhia was a "war crime" carried out by Russian forces who intended to step up their attacks on civilian targets.

The strikes came hours after the Kremlin said it was formally seizing Europe's biggest nuclear power plant nearby. Ukrainian emergency services said three bodies have been pulled from the rubble of the five-story apartment block and a three-year-old girl was among those saved. 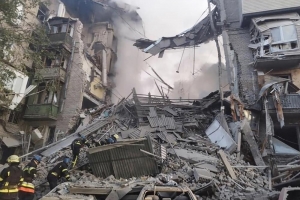 Russian missiles hit apartment buildings in the southern Ukrainian city of Zaporizhzhia on Thursday, a local official said, killing three people and wounding at least 12 in a region that houses Europe’s biggest nuclear power plant and which Moscow has illegally annexed.

The two strikes, the first before dawn and another in the morning, damaged more than 40 buildings, authorities said. The attacks came hours after Ukraine’s president announced that his military had retaken three more villages in another of the four regions annexed by Russia, Moscow’s latest battlefield reversal....