NASA's Artemis I Mission Takes Off in Return to the Moon

NASA successfully launched its Artemis 1 mission early Wednesday morning, the first step in sending humans back to the Moon.

For Context: The launch was delayed several times due to fuel leak concerns and Hurricane Ian. The last manned mission to the Moon was Apollo 17, which took place from December 7-19 in 1972. The rocket stand 322 feet tall and is topped by the Orion capsule that will eventually carry astronauts to the Moon.

How the Media Covered It: Sources across the political spectrum similarly framed the launch as a historic moment for NASA and U.S. space exploration. NBC News called it "a crucial first step toward returning astronauts to the lunar surface." Fox News called it the "first step in mankind’s historic return to the Moon." 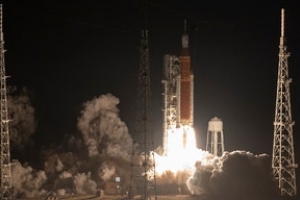 NASA described the launch of the Space Launch System (SLS), carrying the Orion spacecraft capsule, as the beginning of "a new chapter in human lunar exploration."

At approximately 1:47 am, the Space Launch System announced the SLS successfully took off from Launch Complex 39B in Florida, beginning a complex, weeks-long process.

"The primary goal of Artemis I is to thoroughly test the integrated systems before crewed missions by operating the spacecraft in a deep... 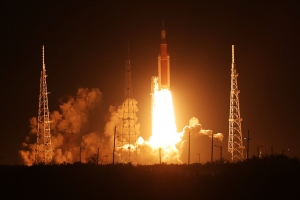 Fifty years after the final Apollo moon mission, NASA has embarked on a crucial first step toward returning astronauts to the lunar surface.

The agency launched its new megarocket and space capsule on a mission to the moon Wednesday in an uncrewed test flight known as Artemis I. The huge rocket blasted off from NASA’s Kennedy Space Center in Cape Canaveral, Florida, at 1:48 a.m. ET.

"[F]or the Artemis generation, this is for you," launch director Charlie Blackwell-Thompson, the agency's first female launch director, said before she gave the go-ahead for... 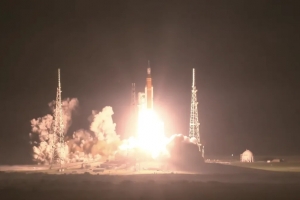 NASA's plan to return humans to the moon is one small step closer to reality with the launch of its most powerful rocket ever. During the dark and early hours of Wednesday morning -- following a painstaking road to launch -- the agency's mammoth, tangerine Space Launch System finally flared to life, lifting off from Launch Complex 39B at Kennedy Space Center.

And it was brilliant.

"We are all part of something incredibly special," launch director Charlie Blackwell-Thompson said just before getting her tie cut -- a lovely NASA tradition that humbly...

CHASE DOAK/AFP via Getty Images
HEADLINE ROUNDUP
Why Hasn't the Military Shot Down the Chinese Balloon?