On Monday, Russia announced that its missiles had destroyed an airport in the industrial city of Dnipro, Ukraine, where four S-300 missile launchers were reportedly hidden.

The action seems to be a push to take out weapons obtained by Ukraine from European countries, and an effort to gain Russian air superiority; Russia says the missile launchers were "delivered to the Kyiv regime by a European country." The failure to obtain complete control of Ukraine's skies has limited Russia's ability to advance their troops without incurring greater losses, and Moscow has recently begun targeting airports and train stations.

Meanwhile, Ukrainian President Volodymyr Zelenskyy tweeted that he had contacted German Chancellor Olaf Scholz about the possibility of an embargo on Russian oil and gas, but Germany so far has resisted this move. 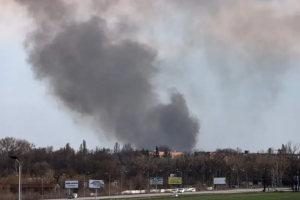 Russian missiles destroyed an airport in the Ukrainian city of Dnipro and five emergency workers were injured in the attack.

“There has been another attack on Dnipro airport. There is nothing left of it,” Valentyn Reznichenko, governor of the central Dnipropetrovsk region, said on Sunday.

“The airport itself and the infrastructure around it has been destroyed. Rockets keep flying and flying,” Reznichenko said on Telegram.

A missile also hit a building in the city’s Pavlohrad district, and emergency workers were combing through an infrastructure facility that was hit in the... 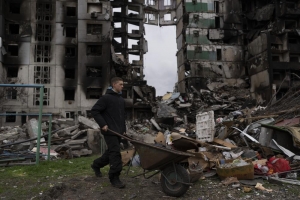 Russia claimed that it destroyed several air defense systems in Ukraine over the weekend, in what appeared to be a renewed push to gain air superiority and take out weapons Kyiv has described as crucial ahead of a broad new offensive in the east.

In one strike announced Monday, Moscow said that it hit four S-300 launchers provided by a European country it didn’t name. Slovakia gave Ukraine just such a system last week but denied it had been destroyed. Russia previously reported two strikes on similar systems in other places. 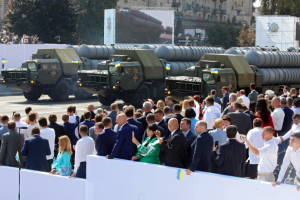 Russia’s military on Monday is claiming to have destroyed air defense systems that were "delivered to the Kyiv regime by a European country."

The Ministry of Defense of the Russian Federation said in a statement that the four S-300 launchers were hidden in a hanger near the eastern Ukrainian city of Dnipro and that 25 Ukrainian soldiers were also hit in the strike, according to Reuters.

"High-precision sea-launched Kalibr missiles destroyed the equipment of a S-300 anti-aircraft missile division which had been delivered to the Kyiv regime by a European country," the...