Missile strikes on a train station in eastern Ukraine killed at least 50 people and injured over 100 on Friday, according to Ukrainian authorities.

Ukraine's Ministry of Defense said that "Russians carried out two missile strikes on railway station in Kramatorsk, where evacuation of civilians was taking place" and that "Russian war criminals not only deliberately targeted thousands of people; they've used cluster munitions." Ukrainian President Volodymyr Zelenskyy said the attack represented "an evil without limits."

Russia denied launching any missiles in the Kramatorsk area Friday, calling the attack a Ukrainian provocation and alleging that the missiles used "are used only by the Ukrainian armed forces." Ukrainian authorities say thousands of people, mostly women and children, were awaiting evacuation at the station when the missiles hit.

The attack was covered prominently across the political spectrum. Many highlighted photos appearing to show that Russia wrote "for children" on one of the missiles used in the attack; some reported that they couldn't confirm who wrote the words on the missile. 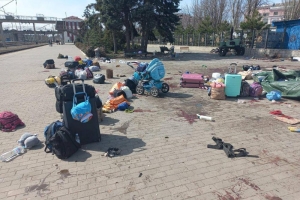 A missile hit a crowded train station in eastern Ukraine that was an evacuation point for civilians, killing dozens of people, Ukrainian authorities said Friday after warning they expected even worse evidence of war crimes in parts of the country previously held by Russian troops.

Ukrainian President Volodymyr Zelenskyy said that thousands of people were at the train station when the missile struck. The Russian Defense Ministry denied targeting the station in Kramatorsk, a city in the eastern Donetsk region, but Zelenskyy blamed Russia for the bodies lying in what looked like an outdoor... 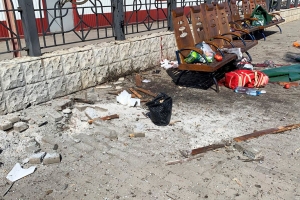 At least 39 people were killed, according to the regional governor. More than 100 were also hurt in the attack, Ukraine's Ministry of Defense said.

"Russians carried out two missile strikes on railway station in Kramatorsk, where evacuation of civilians was taking place," the ministry tweeted. "But Russian war criminals not only deliberately targeted thousands of people; they've used cluster munitions."

The station was being used to evacuate civilians.

"Thousands of people were at the station... 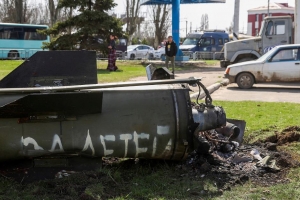 At least 30 people, including two children, were killed after Russian forces carried out a missile strike on a railway station in Kramatorsk, eastern Ukraine, that was being used by civilians trying to flee the fighting, Ukrainian officials said Friday.

Tetiana Ihnatchenko, a spokeswoman for the region of Donetsk where the attack took place, said that first responders had confirmed the initial casualty figures and warned the numbers were likely to rise.

Ukrainian President Volodymyr Zelensky said later that nearly 300 people have been wounded in the strike and that...