Putin alleged that "fundamental Russian concerns were ignored" by the U.S. and other members of the North Atlantic Treaty Organization (NATO). He also claimed that the most important objective for the U.S. "is to contain Russia’s development," while adding his "hope that we will eventually find a solution" to the Ukraine tensions. Russia wants NATO to exclude Ukraine from membership and agree to withdraw forces from Eastern Europe and refrain from deploying weapons near the Russian border. Putin's remarks followed a heated U.N. Security Council meeting Monday between American and Russian diplomats.  The State Department said Monday that it received a follow-up from Russia to a U.S. proposal sent last week on how to defuse tensions and hold more negotiations in response to Russia's demands. Russia has more than 100,000 troops near Ukraine’s borders, and the U.S. and NATO have warned of a potential invasion soon.

Putin's comments were covered prominently across the spectrum Tuesday. Some right-rated outlets framed Putin's criticisms as being more accusatory and critical of the U.S. position. Reports from left- and center-rated sources more often highlighted Putin's expressed intent to eventually find a non-violent solution and pledge that Russia will not start a war over Ukraine. 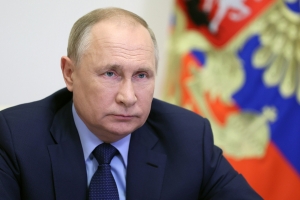 Russian President Vladimir Putin on Tuesday accused the U.S. of trying to stoke conflict in Ukraine and continued to insist that his government does not have any intention of invading its neighbor.

Putin claimed the United States’s “most important task is to contain Russia’s development.”

“Ukraine is just an instrument of achieving this goal,” he added. “It can be done in different ways, such as pulling us into some armed conflict and then forcing their allies in Europe to enact those harsh sanctions against us that are being discussed today in the...

Read full story
Some content from this outlet may be limited or behind a paywall.
See full media bias rating for National Review
From the Left
314
World
Putin offers more talks with West to defuse Ukraine tensions
Associated Press 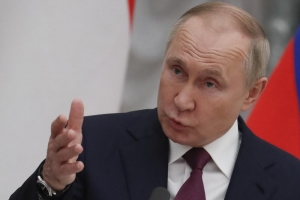 Russian President Vladimir Putin said Tuesday that the U.S. and its allies have ignored Russia’s top security demands but added that Moscow remains open to more talks with the West on easing soaring tensions over Ukraine.

Putin argued that it’s possible to negotiate an end to the standoff if interests of all parties, including Russia’s security concerns, are taken into account.

“I hope that we will eventually find a solution, although we realize that it’s not going to be easy,” Putin said.

He deplored the Western refusal to consider the... 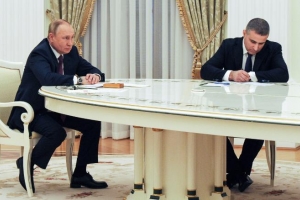 Russian President Vladimir Putin said his government was studying the responses from the United States and NATO to Russia's security concerns, but said his country's main complaints "had been ignored."

For weeks Putin had remained tight-lipped about a possible invasion of Ukraine, making scant public remarks about the crisis and the buildup of tens of thousands of Russian troops near the Ukrainian border.

But speaking at a Tuesday news conference following a five-hour meeting in Moscow with Hungarian Prime Minister Viktor Orban, the Russian President said: "It is already clear...