Protests in Iran continued for a third week over the death of 22-year-old Mahsa Amini, prompting a wide range of perspectives on the protesters, the country’s hijab laws, the government’s anti-protest efforts, and ways international supporters can help.

By some counts, over 150 people have been killed amid a forceful and often violent government crackdown. Many around the world, including celebrities and lawmakers, joined the protesters in cutting off their hair in a statement of defiance. The U.S. announced a new round of sanctions on Thursday against Iranian officials over the crackdown. Ayatollah Ali Khamenei, Iran’s supreme leader, said foreign enemies like the U.S. had “engineered” the “riots.”

Commentators around the world offered a wide range of perspectives on the protests; voices in right-rated outlets tended to focus more on the Biden administration’s actions. While Western voices appeared unanimously supportive of the protests, coverage in Russian state-funded outlet RT (Lean Right bias) called them “riots” and took Iranian government statements about Amini’s death at face value.

Meanwhile, IranWire (Not Rated), an English-language outlet run by Iranian journalists, accused the Iranian government of lying. A writer in The Jerusalem Post (Center bias) said Western countries had a “responsibility to amplify Iranian voices,” but an editorial in The Indian Express (Not Rated) warned that the “courage” of Iranian protesters “must not be upstaged” by others. 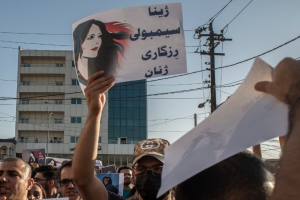 Democracies tend to be more effective in speaking to their own people than in communicating with foreign audiences. Part of the reason is that public diplomacy, the practice of engaging and informing the people of other nations, is still considered an elite practice confined to the marble halls of the State Department and foreign ministries.

But public diplomacy — because it is so people-centric — can make the difference between long-term peace and global upheaval.

The death of 22-year-old Mahsa Amini for wearing an “inappropriate hijab” has sparked mass protests from... 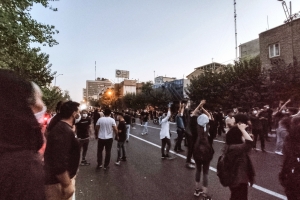 Over the past three weeks, young female protesters in Iran have led the biggest show of resistance against the country’s theocratic regime in more than a decade. US and European leaders have rightly voiced support for them. As the regime intensifies its brutal response, the West should do what it can to ensure the movement survives.

The eruption of anger was sparked by the death of Mahsa Amini, a 22-year-old Iranian Kurd, who died in custody of Iran’s “morality police” after she was arrested for allegedly flouting local dress codes....

Iranian protests are in their third week. What began in outrage over a woman murdered in police custody has spread across the country. Protests have captured the popular imagination. Videos go viral of women cutting their hair, burning headscarves, or singing. Chants of "Death to the Dictator" are undeniable. That Supreme Leader Ali Khamenei must rely on the Lebanese Hezbollah to quell unrest suggests desperation.

Wishful thinking is no strategy, no matter the hunger for change. The price of liberty will be high. In 1979, Ayatollah Ruhollah Khomeini promised Iranians an "Islamic democracy"...