Although Kavanaugh's judicial record has no decisions related to LGBT rights, some have expressed fear that he will vote against the interests of the minority community. During his confirmation hearing, Democratic Sen. Kamala Harris asked if he thought Obergefell v. Hodges, the landmark case that legalized same-sex marriage nationwide, was correctly decided. His refusal to answer the question prompted some to speculate that he will work to reverse the decision, while others noted that it is standard procedures for nominees to abstain from providing their opinions on any given case. 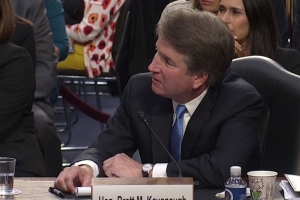 Supreme Court nominee Brett Kavanaugh told senators, ‘The days of discriminating against gay and lesbian Americans or treating [them] as inferior in dignity and worth are over.’

Since President Trump nominated Judge Brett M. Kavanaugh to the Supreme Court, gay Americans have been among those most concerned about the implications of his confirmation.

Gay-rights supporters who thronged the Supreme Court plaza after justices declared same-sex marriage a constitutional right expect to have little to celebrate if Brett Kavanaugh replaces Justice Anthony Kennedy, the author of all the court’s major gay-rights rulings.