Much of the discussion surrounding Brett Kavanaugh's Supreme Court nomination has revolved around his stance on abortion, with debate swirling around whether or not he would help overturn Roe v. Wade. Some say that the nominee's judicial record shows he will disregard the legal precedent, while others argue that the landmark decision is unconstitutional and should indeed be reversed. 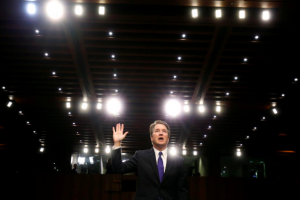 U.S. senators on Wednesday are set to probe Brett Kavanaugh, President Donald Trump’s nominee to fill a vacancy on the Supreme Court, over his views on abortion as his confirmation hearing

Read full story
See full media bias rating for Reuters
From the Left
319
Supreme Court
If Kavanaugh is confirmed, any of these 13 cases could end Roe v. Wade
Vox

The landmark abortion decision could be overturned within a year.