Did Police Respond Appropriately to the Uvalde Shooting?

As the nation grappled with the Uvalde elementary school shooting, some began scrutinizing how law enforcement officers responded to the violence.

The exact timeline was still somewhat unclear on Thursday, with the Associated Press (Center bias) calling the events “murky” and pointing to “contradictory accounts” by police. On Tuesday, a Texas Department of Public Safety official told CNN (Left bias) that law enforcement had exchanged fire with the shooter before he began targeting children; another Texas DPS official said the shooter was killed 40 minutes to an hour after police first encountered him. That official also said police “did contain him in a classroom” — a classroom full of students.

In a video posted online, frustrated families outside Robb Elementary School urged a group of police officers to enter the building as the shooting took place; some even suggested attempting to stop the shooter themselves. The Border Patrol agents who eventually killed the shooter reportedly considered it a “suicide” mission to attack his barricaded position; at least one agent was injured in the assault, but none died.

Coverage was widespread and prominent from outlets across the political spectrum on Thursday, particularly regarding the video of families gathered outside the school, and many framed the police response in a questionable light. Some coverage reflected polarized attitudes towards police; a Vice (Left bias) headline said the police timeline had “a lot of holes,” and a Washington Examiner (Lean Right bias) article praised a “hero” Border Patrol agent. 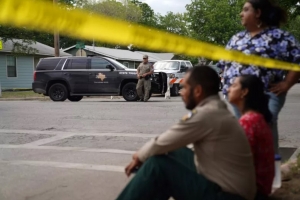 Child killer Salvador Ramos was involved in a shootout with authorities before he entered the school to begin his massacre, but they were unable to stop his rampage, an official revealed.

Despite coming under fire by officers as he approached Robb Elementary School, Ramos—who was wearing body armor—managed to continue on his path into the building, where he killed 19 children and two adults on Tuesday morning.

The 18-year-old was armed with a handgun, an AR-15 semi-automatic rifle, and high-capacity magazines, investigators said after the attack in Uvalde, Texas.

Read full story
Some content from this outlet may be limited or behind a paywall.
See full media bias rating for Newsweek
From the Left
350
Violence in America
Authorities took an hour to stop Uvalde gunman, raising questions about law enforcement response
The Texas Tribune 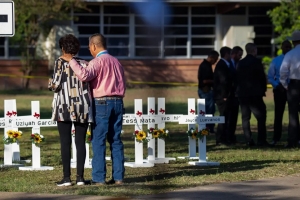 A gunman who killed 19 children and two teachers at a South Texas elementary school walked unopposed onto school grounds, state law enforcement officials said Thursday — and once he was inside, it took police an hour to stop him.

In the days after the massacre at Robb Elementary School in Uvalde, officials with the Texas Department of Public Safety said the shooter encountered a police officer employed by the school district before charging through a back door. 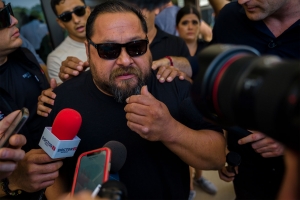 The teenage madman who slaughtered 19 kids and two teachers in a Texas school spent more than 40 minutes inside as witnesses desperately urged police to charge into the building, it was ­revealed Wednesday.

Salvador Ramos barricaded himself inside the classroom before opening fire on students and teachers inside. Border Patrol agents finally breached the door about 40 minutes to an hour later when a staff member gave them a key.