A majority of Californians voted against the effort to recall Gov. Gavin Newsom (D), ending the lengthy campaign to oust him over what critics argued were overly restrictive COVID-19 guidelines. According to an Associated Press projection and other news sources across the spectrum, 64% of people had voted "no" to recalling Newsom with roughly 68% of ballots counted as of Wednesday morning. Conservative talk show host Larry Elder was the favorite to replace Newsom if a majority of people had voted "yes." Newsom tweeted, "Now, let’s get back to work" late Tuesday; Elder conceded Tuesday night, telling his supporters to "be gracious in defeat."

Coverage from left-rated outlets often framed Newsom's victory as a win for Democrats, a rebuke of traditional conservatism, and a vote for more restrictive pandemic guidelines. Coverage from right-rated sources more often reflected on the original reasons for the recall, and placed more focus on Elder's campaign and political future. 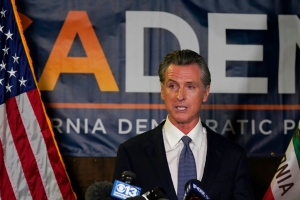 A majority of Californians have voted no - meaning against removing Newsom from office - in Tuesday's recall election of the embattled first-term Democratic governor.

Newsom, who was overwhelmingly elected governor in 2018 in the heavily blue state, was facing a recall drive sparked last year mainly over accusations that he mishandled his state’s response to the coronavirus, the worst pandemic to strike the globe in a century.

The governor, who cruised to major victory, said soon after the Associated Press projected... 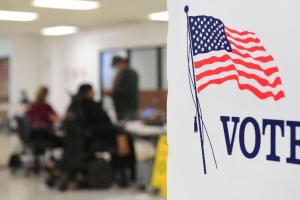 California Democratic Gov. Gavin Newsom delivered a decisive answer to the question of whether voters would penalize those who enacted strict policies aimed at slowing the coronavirus pandemic, triumphing over an effort to recall him Tuesday.

Newsom faced the first recall election in California in 18 years. At one point, weeks before the election, he appeared to be in serious enough jeopardy that Democrats decided to dispatch President Joe Biden and Vice President Kamala Harris to campaign for him.

Republicans sought a replay of 2003, when actor Arnold Schwarzenegger attracted support across ideological lines and voters decided to boot then-Gov.... 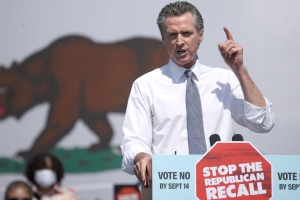 Why it matters, via Axios' Margaret Talev: Tuesday's results highlight the limits of Republicans trying to use Trump tactics in a deeply Democratic state.

The campaign of Larry Elder — a conservative radio show host and Black Republican who has embraced Trump and anti-COVID vaccine rhetoric — in particular may have done more to help Newsom than hurt him by motivating Democrats to cast their ballots.

What he's saying: Newsom thanked Californians at a news conference for "overwhelmingly" voting "no" in the...

Andrew Yang to Abandon Democrats and Start a Third Party

Andrew Yang, formerly a 2020 presidential hopeful and 2021 candidate for mayor of New York City, is expected to abandon his affiliation with the...