The recall election of California Gov. Gavin Newsom is set for Tuesday, with roughly 7.8 million ballots cast as of Monday. More than 1.7 million Californians signed a petition to recall Newsom, mainly over gripes with his COVID-19 pandemic restrictions; ballots have to be postmarked, put in drop boxes or returned in-person by Tuesday. Recent polls addressed by sources across the spectrum suggest Newsom's chances of remaining in office are good, and have improved in recent weeks; Democrats hold a nearly 2-to-1 voter registration advantage in California. Conservative Larry Elder is the frontrunner to contend with Newsom out of the 46 challengers on the ballot. Newsom has reportedly spend roughly $36 million on the anti-recall effort; Elder had reportedly raised $4.5 million by the start of last month. Counties must certify their results by Oct. 14.

The recall has made headlines on all sides, with many analyzing the recall's potential consequences, both for California and national politics. Left-rated sources often highlighted polls and pundits who projected the recall to fail; some left-rated voices framed the possibility of Elder winning as disturbing and dangerous. Right-rated sources often concentrated on Newsom's fundraising efforts and support he's received from national political figures, including President Joe Biden; some accused Democrats of fear-mongering to help Newsom remain in office. 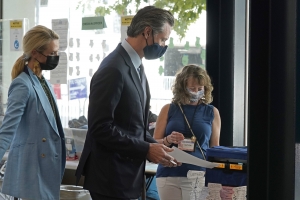 California Gov. Gavin Newsom heads into the Golden State recall Tuesday with the wind at his back after the last polls of the race show voters want to keep him in the job.

A Survey USA and the San Diego Union-Tribune poll showed 54 percent of likely voters saying Newsom should stay in office, while just 41 percent said they planned to vote “yes” on the recall. A second Berkeley Institute of Government Studies and Los Angeles Times survey showed Newsom coasting by an even bigger margin, with 60 percent of likely... 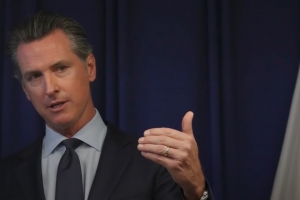 In the early days of the coronavirus pandemic, no governor in America moved faster to close down schools, restrict businesses and order his own constituents into a long and painful lockdown than did California Gov. Gavin Newsom (D).

Newsom’s steps, at times taken ahead of public health advice issued by the Trump administration, poured gasoline on what had been a sleepy and uninspired effort to recall the governor, firing up a fierce anger that has now forced Newsom to defend himself in a pricey fight to save his political career. More than... 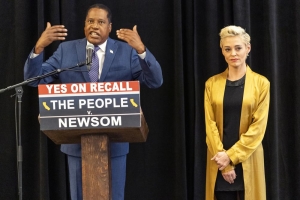 In a blitz of TV ads and a last-minute rally, California Democratic Gov. Gavin Newsom urged voters Sunday to turn back a looming recall vote that could remove him from office, while leading Republican Larry Elder broadly criticized the media for what he described as double standards that insulated Newsom from criticism and scrutiny throughout the contest.

The sunny, late-summer weekend was a swirl of political activity, as candidates held rallies, continued bus tours and cluttered the TV airwaves with advertising offering their closing arguments in advance of the election...

Andrew Yang to Abandon Democrats and Start a Third Party

Andrew Yang, formerly a 2020 presidential hopeful and 2021 candidate for mayor of New York City, is expected to abandon his affiliation with the...