Key Quotes: According to a memo reviewed by The Verge, Twitter notified employees Friday that "In an effort to place Twitter on a healthy path, we will go through the difficult process of reducing our global workforce." The memo acknowledges that "this is an incredibly challenging experience to go through, whether or not you are impacted," and thanks employees for "continuing to adhere to Twitter policies that prohibit you from discussing confidential company information on social media, with the press or elsewhere."

For Context: Musk is expected to cut at least half of Twitter’s roughly 7,500-person workforce. All Twitter employees will learn whether they've been laid off by 9 a.m. PT Friday, according to the memo. A class-action lawsuit was filed against Twitter Thursday on behalf of workers who claim the layoffs violate a federal law requiring 60 days notice for employees.

How the Media Covered It: Reports on the layoffs were similar from sources across the political spectrum. Left-rated sources continue to focus more on internal turmoil at Twitter and employees' gripes with Musk's takeover. 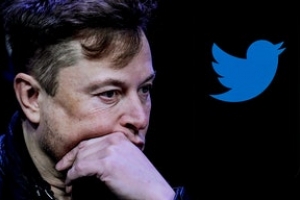 A class-action lawsuit was reportedly filed against Twitter on Thursday on behalf of workers claiming the company’s intended layoffs violate a federal law requiring 60 days notice for employees.

A week after Elon Musk finalized his $44 billion purchase of the Silicon Valley-based social media platform, a letter went out to employees saying about half of the company’s 7,500-person workforce will be losing their jobs starting Friday.

"Team, in an effort to place Twitter on a healthy path, we will go through the difficult process of reducing our global workforce on Friday," Thursday's email...

Twitter has notified employees that it will be “reducing our global workforce” on Friday, November 4th, according to an unsigned internal memo seen by The Verge.

The confirmation comes a week after Elon Musk became Twitter’s new owner and quickly started changing how the company operates and its product roadmap. Since then, speculation about the timing and scope of the expected layoffs has run rampant inside Twitter.

Employees will receive an email by 9AM PST on November 4th confirming whether they have been laid off or not, according to the internal memo, which also...

Open on The Verge

Elon Musk will begin laying off employees at Twitter on Friday, according to a companywide email Thursday evening, as the tech billionaire tries to reduce costs after purchasing the influential social network.

"In an effort to place Twitter on a healthy path, we will go through the difficult process of reducing our global work force," the unsigned email said, according to the New York Times and Washington Post. "We recognize that this will impact a number of individuals who have made valuable contributions to Twitter, but this action is...