President Joe Biden offered to lower his infrastructure deal to $1 trillion in an attempt to reach a bipartisan compromise on Thursday, the Washington Post reported. In the meeting with Sen. Shelley Moore Capito (R-W. Va.), Biden also proposed a 15% minimum tax on corporations, as well as possible revenues from increased IRS enforcement. The new proposal by Biden is significantly lower than his initial $2.3 trillion proposal; however, it is still higher than the Republican $928 billion counteroffer that would draw much of the money from unspent funds originally set aside for coronavirus relief legislation and $257 billion in new spending. Biden, however, is still reportedly still committed to funding the bill with a corporate tax hike, which the GOP has taken a firm stance against as it would undo the party's 2017 tax cuts. Biden is expected to meet again with Capito Friday. 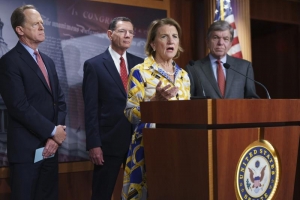 President Joe Biden is trying to break a logjam with Republicans on how to pay for infrastructure improvements, proposing a 15% minimum tax on corporations and the possibility of revenues from increased IRS enforcement as a possible compromise.

The offer was made Wednesday to Republican Sen. Shelley Moore Capito of West Virginia as part of the bipartisan negotiations and did not reflect a change in Biden’s overall vision for funding infrastructure. 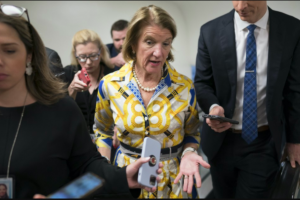 President Joe Biden is reportedly coming down on the price tag on an infrastructure package in hopes of coming to a bipartisan compromise with a group of Republican senators, but new spending and corporate tax hikes remain sticking points in negotiations.

In about an hourlong meeting with Republican negotiator West Virginia Sen. Shelly Moore Capito on Wednesday, Biden asked for $1 trillion in new spending on top of a baseline of $400 billion over five years, according to CNN and Politico.

That would put Biden's new ask down from his initial $2.3 trillion proposal and the $1.7...

Read full story
Some content from this outlet may be limited or behind a paywall.
See full media bias rating for Washington Examiner
From the Left
835
Economic Policy
Biden offers tax concession in infrastructure talks with key Republican
Washington Post 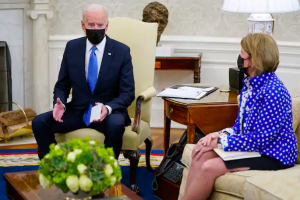 President Biden signaled at a private meeting on Wednesday that he would be open to significant revisions on the size of his infrastructure package and how it would be paid for in order to win Republican support, outlining a plan for about $1 trillion in new spending financed through tax changes that do not appear to raise the top corporate rate.

While Biden has not abandoned his call for these tax increases as part of his broader agenda, the moves are still a potential new concession in stalled talks over...

In a pivotal week, in a make-or-break stretch for President Biden’s domestic agenda, congressional Democrats are trying to assemble a puzzle of four jagged...

Missed deadlines, GOP blockades and the week that makes or breaks Biden and Democrats

President Joe Biden enters the most seismic week of his legislative agenda explicitly set to miss one deadline and implicitly knowing he'll soon have...

After eight days of delay, some families said they finally began seeing money for the Sept. 15 payment of the child tax credit on Friday. But not everyone got...

Joe Biden Is Down to Tax the Richest of the Rich. Congress? Not So Much.
OPINION

According to a story from the New York Times earlier this week, the Biden administration is pushing stats based on an “unconventional”...

A Government Shutdown Is Just 3 Days Away—Here's What Would Happen If Lawmakers Don't...

With the federal government just three days away from running out of funds, lawmakers still have no clear plan to prevent the government from shutting down...

At least three Federal Reserve officials said Monday they are ready to pull back on stimulus even though they don’t see a threat from inflation. Speaking at...

Biden plan seeks to expand education, from pre-K to college

As Democrats push ahead with President Joe Biden’s $3.5 trillion rebuilding plan, they’re promising historic investments across the arc of an education —...

Billions more in profits are at stake for some vaccine makers as the U.S. moves toward dispensing COVID-19 booster shots to shore up Americans’ protection...

Pelosi strikes confident tone on infrastructure, says she ‘never’ brings bill to floor without the...

House Speaker Nancy Pelosi told House Democrats in a letter Sunday night to fellow Democrats that the $1 trillion infrastructure bill will be voted on...

Pelosi wavers on Monday infrastructure vote, says it will happen ‘this week’

House Speaker Nancy Pelosi waffled Sunday on her commitment to bring the bipartisan $1.1 trillion infrastructure bill to the House floor...

Senate Dems undercut Schumer’s claims of unity on tax hikes: ‘We don’t have an agreement’

Members of Senate Majority Leader Charles E. Schumer’s leadership team contradicted his claims Thursday that Democrats had agreed to a “framework” of...