On Wednesday, President Joe Biden offered $800 million in new military aid to Ukraine as Russian shelling continues and refugees continue to flee but hope for peace. The funding comes from the $13.6 billion aid package signed into law on Tuesday.

The announcement came hours after Ukrainian President Volodymyr Zelenskyy pleaded with Congress for more help, and the assistance is expected to help local forces counter Russian missile attacks. It includes anti-aircraft systems, shoulder-mounted anti-armor machine guns, and grenade launchers, among other things.  The aid does not, however, fulfil Zelenskyy's request for a no-fly zone or to send jets to Ukraine to help in their fight against Russia. 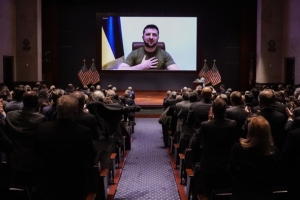 The U.S. is sending an additional $800 million in military assistance to Ukraine, President Joe Biden announced Wednesday, hours after Ukrainian President Volodymyr Zelenskyy made an impassioned plea to Congress for more help.

The additional assistance, which brings the total the U.S. sent to Ukraine this week to $1 billion, is expected to help local forces better counter Russian missile attacks on major Ukrainian cities. But it does not fulfill all of Zelenskyy’s requests, which included American help to enact a no-fly zone over Ukraine as Russian leader Vladimir Putin continues to target civilians. ... 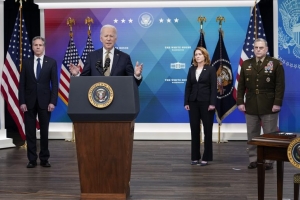 President Biden on Wednesday announced the U.S. will provide more than $800 million in military aid for Ukraine, as Russian bombs fall on its cities and more than three million refugees have fled the country.

“It’s about making sure Ukraine will never be a victory for [Russian President Vladimir Putin], no matter what advances he makes on the battlefield,” Mr. Biden said in a speech from the White House.

The new package brings the total amount of U.S. military aid sent to Ukraine this week to more than $1 billion, Mr. Biden said.

Read full story
Some content from this outlet may be limited or behind a paywall.
See full media bias rating for Washington Times
From the Left
314
World
Biden announces fresh aid to Ukraine but stops short of Zelenskyy's demands
Politico 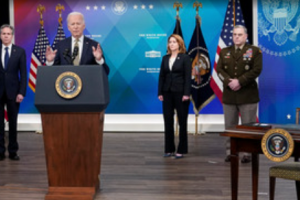 President Joe Biden on Wednesday announced an additional $800 million in military aid to Ukraine, bringing the total amount of funding allocated to the country this week to $1 billion.

Biden’s announcement came on the heels of Ukrainian President Volodymyr Zelenskyy’s speech to Congress, in which Zelenskyy pleaded with the U.S. and its NATO allies to enforce a no-fly zone over Ukraine or send jets to aid in its fight against Russia. Biden made no mention of either Zelenskyy request, and emphasized the aid would empower Ukrainians to fight the...