Elections, Virginia, Glenn Youngkin, Democrats, Midterm Elections
Save for Later
From The Left 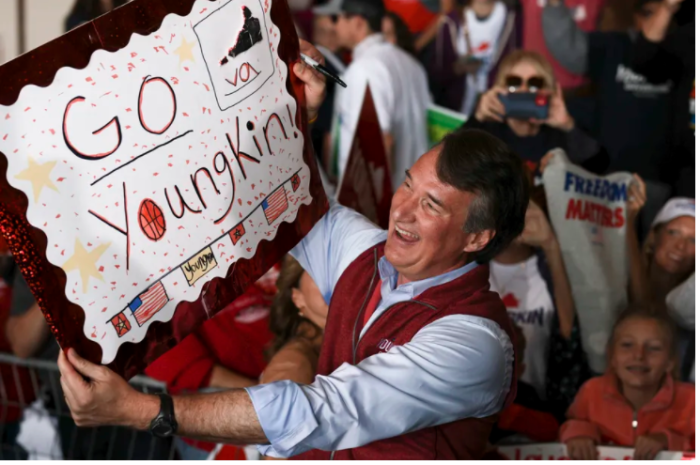 After a string of election victories in Virginia, Democrats thought the state had turned blue, but Republican Glenn Youngkin has won this year’s governor’s contest, defeating former Gov. Terry McAuliffe and delivering the state back into the GOP’s hands. Media outlets called the race for Youngkin early Wednesday morning.

The final margin isn’t yet clear, but no matter what, it represents a major swing of Virginia voters toward Republicans that will strike fear into Democrats’ hearts ahead of next year’s midterm elections. In 2017, Democrats won the governor’s race by 9 percentage points, and Joe Biden won the state by 10 points in the 2020 presidential election.

It’s a mistake to read too closely the results of any one governor’s race; these races are affected by national partisan trends but aren’t as closely linked to them as presidential and congressional races. Voters in solid red states Louisiana and Kentucky are still willing to elect Democratic governors, while voters in solid blue states Massachusetts and Vermont have in recent years chosen Republicans.

The specific candidates and circumstances in the state can matter a great deal here. In Virginia, local issues like the state of the school system got much of the candidates’ focus, and McAuliffe, who only narrowly won the governor’s office in 2013, has never been the most appealing figure.

But it would also be a mistake to totally dismiss the Virginia outcome as a one-off. The election’s issues may have been framed in local terms, but some of them — the economy, frustration with schools’ handling of the pandemic, and safety — apply all over the country. (New Jersey’s governor’s race hasn’t yet been called, but the count as of early Wednesday shows a closer race than Democrats expected there.)