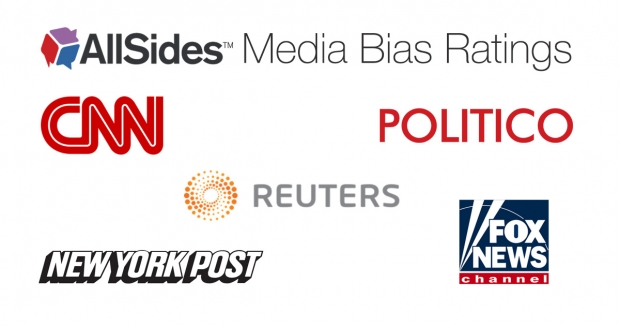 In this blog, we’ll tell you a bit about how the survey was conducted, and give a summary of the results for each outlet.

The results led us to change the AllSides Media Bias Rating™ for CNN from Lean Left to Left, affirmed our ratings for Fox News (Lean Right) and Politico (Lean Left), and led to a deeper review of Reuters and New York Post.

Reuters is rated Center by AllSides, but survey results turned a Lean Left bias. An Editorial Review led AllSides to keep Reuters rated Center (Editorial Reviews allow us to assess the outlet's content over a longer period of time than a bias survey. We want your feedback — vote on whether you agree here).

New York Post is rated Lean Right by AllSides; survey results showed a bias between Center and Lean Right, though closer to Center. An Editorial Review led us to keep New York Post as Lean Right.

Note that blind surveys offer robust data but have limitations. Blind surveys alone do not always determine our ratings, because these surveys ask respondents to assess content taken from a relatively small moment in time. The surveys don't include photos, content published over a long period of time, or other elements. Therefore, we also use other methods to arrive at a final bias rating, such as Editorial Reviews, third party data and independent reviews.

The content — headlines and content from articles — is stripped of any branding or information that would allow the participant to identify where the content came from. This ensures their pre-conceived notions of the outlet or brand don’t affect their ratings.

Remember, there is no "accurate" measure of bias – bias is largely in the eye of the beholder. What seems like a left-wing view to a right-winger may seem like a centrist view to a left-winger. That's why we survey Americans from across the country, of various ages, geographic locations, and political leanings. We also normalize the data and don’t let majority rule determine our ratings.

The blind bias survey led us to shift the AllSides Media Bias Rating™ for CNN’s web news content from Lean Left to Left.

On average, people who self-reported that they are on the left rated CNN as being between Lean Left and Left; people in the center and on the right found CNN on average to be Left. The average rating from all people across the political spectrum was Left.

Note that this rating is for CNN’s online, web content only — not its broadcast, cable TV content. We also rate CNN’s Editorial/Opinion content separately; its bias now matches that of the news section, and both are Left.

Read more about this shift on CNN’s source page, and vote on whether you agree.

Pluralities across all groups — liberals, conservatives, and centrists — found Fox to be Lean Right. Participants who identified themselves as on the right or in the center on average rated Fox News as being right between Center and Lean Right; people on the left rated Fox on average as firmly Lean Right.

Note that AllSides rates the online content on FoxNews.com only. AllSides does not rate the bias of broadcast TV or radio content.

Read Fox News’ updated bias rating here, and vote on whether you agree.

Participants in our blind bias survey on average rated the New York Post as between Center and Lean Right, though closer to Center. This triggered an Editorial Review, in which the AllSides team decided to keep New York Post’s Media Bias Rating™ as Lean Right.

The average rating for Politico from people across the political spectrum was a firm Lean Left, affirming our Lean Left rating.

The results signified near universal agreement of Politico’s bias on average. The average rating for Politico from people of all biases — Left, Lean Left, Center, Lean Right, or Right — was Lean Left.

Get more details on Politico’s bias rating here, and vote on whether you agree.

A plurality of respondents who self-identified as Lean Left, Center, Lean Right, and Right rated Reuters Lean Left; the most common response from those with a Left bias was Center.

AllSides currently rates Reuters as Center. The results triggered an Editorial Review, in which AllSides opted to keep Reuters’ rating as Center. Remember, blind surveys alone don’t always determine our ratings because they offer participants only a small snapshot in time, while Editorial Reviews allow the AllSides team to review photos and an outlet’s content over a longer period of time.

Read more about our Editorial Review of Reuters here, and vote on whether you agree with our rating.