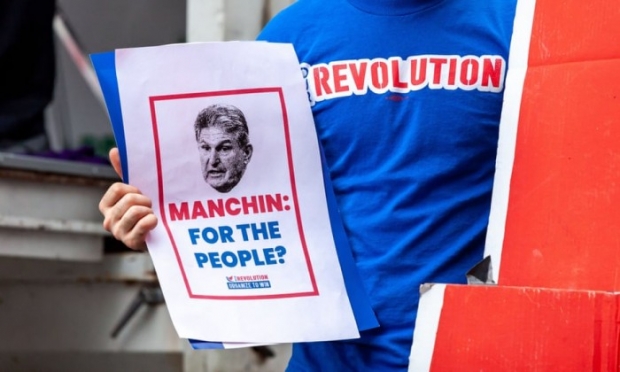 Republicans defeated Democrats' For the People Act in the Senate Wednesday, with all 50 GOP senators voting against it. The bill needed 60 votes to overcome the filibuster used by Republicans, and Democrats would have needed 10 Republicans to overcome that filibuster. The legislation's major aspects include expansion of early voting, relaxation of voter ID requirements, and allowance of voter registration on election day. Supporters say it would expand voting access for previously suppressed people; they accuse opponents of siding with voter oppression and systemic inequity. The bill's opponents say it creates more opportunities for voter fraud; they accuse Democrats of ignoring this and other concerns from the right.

Narratives about the bill from left- and right-rated media have often differed, typically aligning with the partisan situation on Capitol Hill. Many left-rated voices accused the bill's opponents of actively standing against voting rights. Many right-rated voices accused the left of blatantly trying to game elections by enabling voter fraud. Coverage across the spectrum has analyzed the legislation's future and how each party may accomplish its legislative goals.

"Democrats heralded the legislation as their No 1 priority, even knowing they were unlikely to get any Republican votes for it. The bill would amount to the most significant expansion of the right to vote in a generation, requiring early voting and automatic and same-day registration, while prohibiting excessive manipulation of electoral district boundaries, a process often called gerrymandering."

"The downfall of the elections bill offers an inflection point, midway in Biden’s first year in the White House, as Democrats take stock of the limits of their narrow hold on Congress. While the outcome of a 50-50 vote on the elections bill mirrored the evenly split Senate’s partisan divide, those lawmakers and advocates seeking to change the filibuster actually saw progress in uniting Democrats around their priority bill."

"It's an expected-but-significant blow to Democrats' hopes of passing a sweeping federal elections overhaul to combat a wave of new voting restrictions in Republican-led states. The far-reaching bill was co-sponsored by every Democratic senator except for Sen. Joe Manchin (D-W.Va.), who called it too partisan and introduced his own compromise bill — which was promptly rejected by Republicans."

Biden to deliver remarks on voting access next week

"Biden has drawn ire from progressives who argued that the White House did not do enough to prioritize the For the People Act. The future of election reform legislation is in limbo following the developments Tuesday, when Republicans voted in unison to prevent Democrats from overcoming the filibuster to advance the bill."

"If enacted into law, the bill would ban most state voter ID laws, expand ballot harvesting, prevent the updating of voter registration lists, establish taxpayer-financed campaigns, and require states to allow same-day voter registration, among many other things...The bill would also create a partisan advantage on the Federal Election Commission, a panel that since its inception in 1975 has been made up of an equal number of Democrats and Republicans."

"President Joe Biden will push states to make it easier to vote after congressional Democrats' sweeping electoral reform bill failed in the Senate. White House press secretary Jen Psaki previewed Biden's next steps to promote ballot box access after he was criticized by liberal Democrats for not speaking more forcefully about the issue."

Story Of The Week, Voting Rights And Voter Fraud, For The People Act, Election