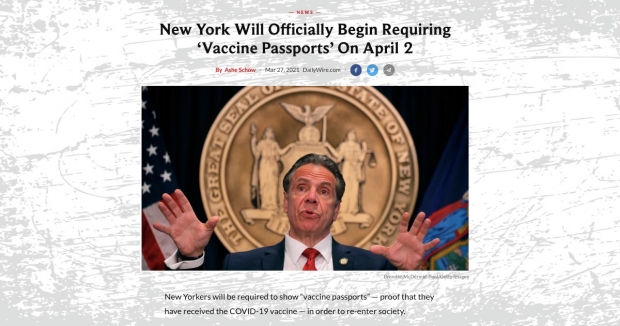 The news that the highest government officials in the land are working on “vaccine passports,” or digital certificates people can use to prove they’re vaccinated when entering businesses, caused outcry on social media from those concerned about encroachment on health freedom. It also triggered a number of misleading and distorted headlines that perhaps fueled the outrage.

Concerns About Mandatory Vaccines Not New

Concerns about a mandatory COVID-19 vaccine have been circling since the beginning of the pandemic. Biden addressed the issue of mandatory vaccines before taking office, saying vaccines would not be mandatory but that he would “do everything in my power as president to encourage people to do the right thing and when they do it, demonstrate that it matters.”

So, what about a year later — we’re now seeing reports about “vaccine passports.” Does that mean the vaccine is now mandatory?

Legally the answer is still no, but the answer is yes when it comes to some institutions — for now at least. Federal governments and private entities are funding the development of digital verification programs, and businesses are starting to adopt the platforms. While there are no explicit government mandates that people must be vaccinated, some public institutions and private businesses, such as universities and cruise lines, are either mandating the vaccine or said they will begin using the verification certificates. For the businesses that plan to use the certificates, it’s currently unclear whether or not it will be a requirement to participate.

But you may not understand this just by reading headlines.

While following this story, we’ve noticed a few headlines on vaccine passports have been misleading.

“New Yorkers will be required to show “vaccine passports” — proof that they have received the COVID-19 vaccine — in order to re-enter society,” Daily Wire writes.

This is a bit of a distortion. The press release by Gov. Cuomo says nothing about a government requirement — it says the app “can be used” by “participating” venues and businesses, not that it must be used. The press release says it is a “free, voluntary platform.”

However, the press release does say the app is “similar to an airline boarding pass,” so it makes sense that some people automatically assumed the verification is mandatory — you can’t get on a plane without a boarding pass, after all. But New York state isn’t requiring anything, as the Daily Wire headline suggests. Still, many New York businesses may be, with the help of this government-backed technology.

This is a notable distinction, though people may disagree about how necessary the distinction really is. The press release is a little convoluted. It says New Yorkers “may choose” to use the pass to verify their status to “gain entry” to certain businesses, but it’s unclear if they have to present their status in order to gain entry. It’s unclear from the press release whether the venues that will “begin utilizing” this technology, Madison Square Garden and the Times Union Center among them, are just using it for data purposes, or requiring it for entry. The media coverage doesn’t clear this up, either.

In addition to The Daily Wire, Disclose.TV (not rated by AllSides) also tweeted a distorted headline, stating that the Biden administration is launching a “passport that Americans must have to engage in commerce,” citing a story by the Washington Post (Lean Left):

Disclose.TV’s tweet triggered a reply from the writer of the Washington Post article, Dan Diamond, who disputed the characterization, saying, “This is not what we wrote. What we reported: Some businesses have said that proof of vaccination will be required; a range of private and public organizations are already racing ahead on designing passports; the Biden admin is working to set standards around what's coming.”

While people may be justified in being on guard against vaccine verification mandates — whether by the government or businesses — media distortion sure is making it harder to know what is really going on at the present moment.

Reading only the headline, it sure sounds like Walmart is planning to require people to have a vaccine to shop there. Words like “push” indicate they want you to show your credentials when entering the store. But if you read the article, it doesn’t say this — it says (emphasis ours): “people who get Covid-19 shots at thousands of Walmart and Sam’s Club stores may soon be able to verify their vaccination status at airports, schools and other locations using a health passport app on their smartphones.”

Being able to verify your status doesn’t mean you’re required to — at least not at Walmart, and at least not yet. Media outlets are blurring the lines and should be careful with how they are framing the news to avoid undue panic. Journalists should also be asking these businesses more explicitly if verification will be required and including that information in their stories.

We also noticed that much of the recent media coverage on “vaccine passports” is somewhat one-sided, committing bias by omission by failing to include concerns and lawsuits from groups like Make America Free Again, Ohio Stands Up!, and New Mexico Stands Up!, which are on alert against business and government vaccine requirements, arguing they infringe upon constitutional freedoms and the individual right to choose. A detention center officer in New Mexico became the first to file a lawsuit over a workplace vaccine requirement. It seems that a media landscape that prominently features the opinions of activists and advocates on issues such as shootings, racism and police is largely not doing so in this case, which amounts to bias.

Is The Term “Vaccine Passport” Accurate?

The New York Post (Lean Right) ran the headline, “Nation’s first ‘vaccine passport’ coming to New York.” This headline isn’t necessarily a lie, but the term “vaccine passport” does imply verification is government-mandated. Some may argue this is misleading because it distorts where the requirement is coming from.

Micky Tripathi, Biden’s national coordinator for health IT, said he doesn’t like the term “vaccine passport” because “passports are something that are issued by governments. … I think of them as vaccine credentials or certificates.”

Still, others may argue “passport” is the most accurate term, since the verification technology is federally funded and will function nearly identically to an airline passport or boarding pass — you won’t be allowed to enter certain spaces without one. Regardless of who requires it, governments or businesses, the function is the same.

“[New York’s] Excelsior Pass is voluntary for both businesses setting policies and customers seeking entry. But it's easy to see how people might feel pressure to adopt the standard in order to stay in the good graces of regulators and licensing authorities,” writes J.D. Tuccille at Reason (Lean Right bias).

In my personal opinion, people are not wrong to speculate and be concerned about so-called “passports” paving the way for mandatory vaccines. People are not wrong to sound the alarm that vaccination could become de facto mandatory (if not legally mandatory) just by virtue of culture and the whole of society forcing you to comply. Whether the requirement comes from the government or is back-doored through businesses that will deny you entry if you don’t have it, the concerns about personal freedoms are valid.

But media companies have a duty to be accurate and not fear-monger or leap ahead of current reality in their headlines. Headlines like The Daily Wire’s, Disclose.TV’s, and the New York Times’ are distorted and unclear.

Many are concerned about vaccine requirements, and the media seems to be preying on this fear by crafting distorted headlines that make it sound like the vaccine is already mandatory in order to fuel outrage and make you click. Yes, it may become mandated, or (perhaps more likely) a majority of businesses will require it, so that it becomes impossible to go anywhere without being vaccinated, but so far that is speculation — and perhaps that's where this all is going, and this article will not age well as a result. But we’re not at that point, at least not just yet. The media should reflect the reality while also accurately spelling out the concerns by advocates for constitutional liberties.

Many people are concerned that the vaccine is so new and want it to be tested for a longer period of time before injecting it into their bodies. Their views are not represented much in the press in general.

You don’t necessarily have to go to sports stadiums or send your kids to public school, but you do have to eat. If airports, schools, and other locations require a vaccine, it could be a slippery slope to grocery stores like Walmart requiring it as well. This is a very valid concern for people who want control over their bodies.

So while we should be on guard about government or business infringements upon our liberties, we should also demand a media ecosystem that employs honest reporting about what is really going on at the present moment.