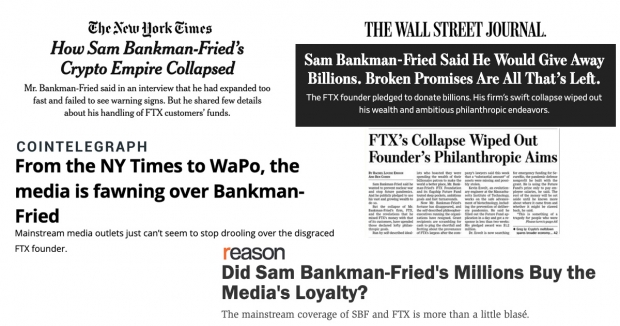 Following the collapse of the FTX crypto exchange, some have accused the media of being too soft on exchange founder Sam Bankman-Fried (known as SBF).

The cryptocurrency exchange filed for bankruptcy after freezing customer withdrawals amid reports that it spent customer funds on risky investments. SBF is accused of transferring roughly $10 billion of customer funds from FTX to his investing company, Alameda Research.

RELATED: Here's What We Know About the FTX Collapse

Many media outlets covering the news did not include SBF’s $40 million in donations to Democrats this election cycle, his contributions to media outlets AllSides rates as on the left, nor other details that could tie SBF to illegal activity.

The New York Times’ headline notably uses passive voice: “How Sam Bankman-Fried’s Crypto Empire Collapsed.” By saying the exchange simply “collapsed,” the headline shifts the focus away from the alleged agent, SBF himself. The sub headline reads: “Mr. Bankman-Fried said in an interview that he had expanded too fast and failed to see warning signs. But he shared few details about his handling of FTX customers’ funds.”

By focusing more on SBF’s claim that he simply made mistakes, and less on the accusation that he illegally transferred money between entities that are supposed to be separate, New York Times slants the piece in SBF’s favor. Some have accused the New York Times of being too cozy with SBF to give fair coverage, noting that SBF spoke at a New York Times Dealbook summit on Nov. 30.

The Wall Street Journal employed similar bias by slant. The outlet was criticized for a story that read, “Sam Bankman-Fried Said He Would Give Away Billions. Broken Promises Are All That’s Left.” In another use of passive voice, WSJ writes that “Mr. Bankman-Fried’s fortune has disappeared.” It’s a true statement, but downplays any suspicions of wrongdoing on his part. The article mostly focuses on SBF’s philanthropic efforts, and does not focus on accusations that he misused customer funds, showing slant and bias by omission. The situation in print was much the same, with WSJ’s homepage print headline also focusing on his philanthropy instead of alleged wrongdoing, reading, “FTX Collapse Wiped Out Founder’s Philanthropic Aims.”

WSJ continues, “On Nov. 11, FTX filed for bankruptcy amid revelations that it lent billions of dollars of customer assets to fund risky bets at its sister trading firm.” By using the word “it,” WSJ again shifts the focus away from SBF himself. The article also omits that SBF is under investigation by Bahamian authorities, who may extradite him, as well as the existence of calls for him to testify before Congress.

Reuters (Center bias), for its part, published an exclusive special report that added more details not shared by the outlets mentioned above, such as how “one of Bankman-Fried's close aides tweaked FTX's accounting software. This enabled Bankman-Fried to hide the transfer of customer money from FTX to Alameda.”

Semafor (Lean Left) was accused of bias by Twitter CEO Elon Musk when it published a story claiming that SBF “owns a sizable chunk of a now privately held and debt-laden Twitter,” writing that Musk had invited SBF to roll the $100 million stake he had in Twitter over into a privately held Twitter. Musk denied this on Twitter, saying that while all public holders of Twitter were allowed to roll their stock into Twitter as a private company, SBF did not do so and “owns 0%.”

Musk followed up with, “To be direct, the very real concern here is that you have been pushing a completely false SBF ownership of Twitter narrative while effectively being his paid shill.”

The seemingly soft coverage of SBF from mainstream media has fueled speculation that news companies, for whatever reason, have some incentive to protect him.

Some, including Reason magazine (Lean Right) editor Robby Soave writing under the headline, “Did Sam Bankman-Fried's Millions Buy the Media's Loyalty?”, argued SBF has received “kinder-than-expected coverage from the mainstream media” and that The New York Times used “soft, passive language to disguise blame at every turn.” Soave criticized the New York Times’ word choice, writing, “Expanded too fast? Failed to see warning signs? He defrauded people out of millions of dollars! The empire didn't collapse of its own accord; it collapsed because its foundations were fraudulent.”

Along with Reason magazine's critique, Charles V. Payne, a Fox Business (Lean Right) financial journalist, also accused the media of bias on Twitter, as well as Balaji Srinivasan, former CTO of Coinbase. Balaji accused legacy media of “protecting” SBF, saying, “[SBF] bought [the media], with what may have been stolen customer funds.”  The type of media bias that Soave and others are accusing the media of is word choice bias and slant.

Watching media with a careful eye can allow us to see biases and loyalties, and help us to understand how we may or may not be getting the full picture. Reading a wide range of content across the political spectrum can help us to get the full story.