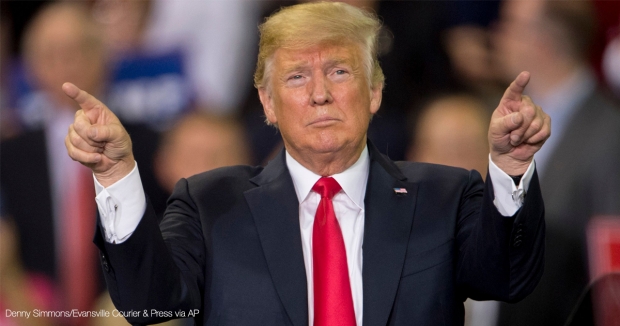 The majority of the mainstream media is left leaning, as you can see from AllSides’ media bias chart and nearly 600 media bias ratings. But in the age of Trump, is the media really left leaning, or do they simply appear left leaning in reaction to him — a president many perceive to be far right?

AllSides has been tracking and rating media bias for years now. Since the election of Donald Trump, some readers have written in asking us if our media bias ratings have artificially moved farther Left as media outlets work to expose his misdeeds.

The bias of the majority of the news organizations we track has not shifted since the election of Trump — but a few have. The fact that so many of these organizations have been providing a great deal of coverage around the Trump administration, including investigations and scandals, yet their media bias ratings have not changed, suggests that the current state of affairs surrounding the Trump administration has not had an impact on our media bias ratings scale.

For example, most of the media outlets that AllSides rates as having a Center media bias have remained Center post-Trump. (Note that unless otherwise noted, we rate online news content only, not opinion pages or radio or TV broadcasts, which sometimes have different leanings). BBC, USA Today and The Wall Street Journal (news, not opinion) have not shifted in their bias ratings despite plenty of coverage around Trump investigations. We also have not detected a shift in left leaning sources like CBS or The Atlantic.

Yet others have shifted. Many years ago, AllSides used to rate CNN online news as Center. While we used to get a lot of feedback from people who believed CNN to be Lean Left, their online news content remained Center for a number of years. (Its cable news programs may always have been Lean Left, but AllSides rates only website content.) Yet a more recent review by AllSides found CNN’s web content has indeed shifted Left in the last couple of years, prompting us to update their media bias rating to Lean Left. CNN web news now places opinion pieces prominently on its homepage and has become less clear on what is fact rather than opinion. While it is not as easy to track, it is certainly possible (even probable) that CNN’s coverage and actual bias shifted after its very public spat with Trump.

And journalism changed overall since the Trump administration. Look at how the media recently covered the Covington Catholic High School story as one example. In this case and many others, the media — including long-established, historically "credible" sources — rushed to quick, unfair judgement and publication about what happened in an attempt to vilify the “other side.”

Historically, news media would spend more time evaluating a story and verifying the facts before rushing to press. Due diligence seems to be less of a standard today than it was in the past. Making quick judgements and churning out pieces of content quickly, without the benefit of time and reflection, breeds more mistakes and more bias, and this seems to be happening more and more in modern media.

This suggests a shift in the way press does things. Social media could be a driving factor, as well as growing polarization and disdain toward “the other side” in America. It is unfortunate, because it makes news less credible and less reliable — and keeps us stuck in filter bubbles.

At AllSides, we aim to free people from filter bubbles so they can better understand the world — and each other. Our media bias ratings help readers to quickly identify multiple perspectives, and by displaying the same news story side-by-side next to different viewpoints, we make it much easier to catch mistakes and walk away with a more complete understanding.

While our media bias ratings have not artificially moved Left since the age of Trump, modern journalism is definitely changing, and Americans are becoming more polarized. AllSides helps you to navigate it. You can make our balanced news feed your daily source of news, powered by over 600 media bias ratings. And as always, don't hesitate to contact us with feedback about our media bias ratings. John Gable is the founder and CEO of AllSides.