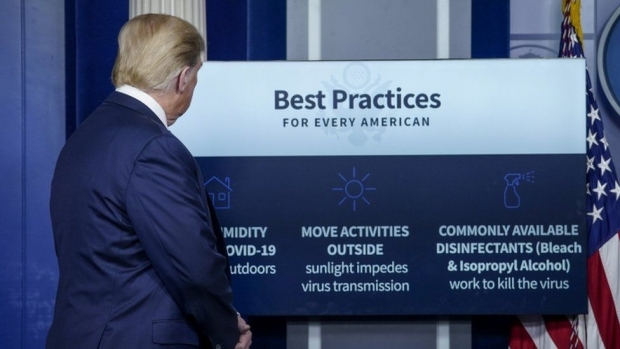 In the midst of summer 2020, when there were still many questions regarding possible coronavirus treatment, members of the White House’s COVID-19 task force briefed the press about the latest coronavirus developments. William Bryan, a Department of Homeland Security official, discussed findings about the success of disinfectant and sunlight in killing the coronavirus.

Then, Donald Trump made comments about the findings, specifically discussing the possibility of using light and disinfectants to kill the virus. The meaning of his words were heavily disputed immediately following this press conference.

Many left-rated news outlets, like CNN (Left bias) and NBC News (Lean Left bias), focused on how Trump “suggested” that injecting bleach could be a way to treat COVID-19.

The tone was much different from right-rated sources, who focused on the argument that Trump didn’t directly encourage the injections and that mainstream media twisted his words. On Fox News (Right bias), panelists felt that while Trump's comments were confusing, he did not suggest that people inject bleach. Breitbart (Right bias) published an article titled, “No, Trump Did Not Literally Suggest People Inject Disinfectant.”

On April 20, 2022 President Donald Trump stepped to the podium during a White House COVID-19 press briefing and stated the following:

“So, I’m going to ask Bill a question that probably some of you are thinking of if you’re totally into that world, which I find to be very interesting. So, supposedly we hit the body with a tremendous, whether it’s ultraviolet or just very powerful light, and I think you said that hasn’t been checked, but you’re going to test it. And then I said supposing you brought the light inside the body, which you can do either through the skin or in some other way. (To Bryan) And I think you said you’re going to test that, too. Sounds interesting, right?

And then I see the disinfectant, where it knocks [COVID-19] out in a minute. One minute. And is there a way we can do something like that, by injection inside or almost a cleaning? Because you see it gets in the lungs and it does a tremendous number on the lungs. So it would be interesting to check that. So, that, you’re going to have to use medical doctors with. But it sounds — it sounds interesting to me. So we’ll see. But the whole concept of the light, the way it kills it in one minute, that’s — that’s pretty powerful.”

A few days later, Trump responded to backlash from his comments by saying, “I was asking a question sarcastically to reporters like you just to see what would happen.”

Reaction from the Left

The reaction to Trump’s comments was very quick and decisive from the left. Twitter exploded with criticism from the left of the former president, relating the incident to their discontent with his presidency as a whole.

Many left-rated outlets criticized Trump’s comments. CNN deemed them “dangerous,” as well as “dubious and inaccurate.” The Guardian (Left Left bias) quoted former White House COVID-19 response coordinator Deborah Birx, who called it a “tragedy on many levels.”  Left-rated sources were also more likely to call his comments a “suggestion” of a possible bleach injection cure.

Some voices on the left even used this incident to compel people to vote for Joe Biden.

There were several cases of people dying after improperly ingesting medication in an attempt to treat COVID-19. Left-rated sources emphasized these statistics and tied them to Trump’s comments. One Time Magazine (Lean Left bias) article published in May was titled, “Accidental poisonings increased after president Trump’s disinfectant comments.”

Other left-rated sources, such as Rolling Stone (Left bias) talked about the medical consequences of “injecting bleach,” claiming that Trump used his platform to promote “dangerous, unfounded medical advice.”

Years later, left-rated media has characterized this moment as an indication of Trump’s purported instability and irresponsibility. One Politico (Lean Left bias) article, headlined “It’s been exactly one year since Trump suggested injecting bleach. We’ve never been the same,”  published a year after Trump’s comments, called it a “watershed moment” that “arguably changed the course of political history” and “came to symbolize the chaotic essence of his presidency.”

Reaction from the Right

Many voices on the right argued that Trump’s words were misconstrued and moved to put his comments in full context.

Greg Gutfield, the host of a Fox News (Right bias) show, said the saga showed the media industry is “mobilized by offhand comments.” He also said, “How can any adult seriously believe that he was saying, “hey, people should inject Clorox into their body.”

Sources on the right also covered the response from Trump’s press secretary at the time, who shamed mainstream media for their response, stating, “leave it to the media to irresponsibly take President Trump out of context and run with negative headlines.”

Claims that the media was overreacting were common from voices on the right, with Candace Owens calling the media reaction a “clown show.”

In regard to the people who drank or injected bleach following his comments, some voices on the right, such as David Harsanyi (Right bias), accused the media of taking “every Trump misspelling, self-praise, garbled sentence, and exaggeration as if it were Watergate.”

Other right-rated sources, such as The Federalist (Right bias), called the mainstream media’s framing of Trump’s comments false altogether, arguing the increase in deaths and poisonings was unrelated to, or occured before, Trump’s comments.

One National Review (Right Bias) opinion article argued that, “To blame Trump for the possibility that someone might have been dimwitted enough to take a swig of bleach as a result of his remarks is to argue that a president should dumb down his public comments to a level at which words of two syllables might find it difficult to make an appearance.”

Trump did suggest that scientists should look into the usage of disinfectant in COVID-19 treatments. However, he did not suggest that viewers attempt the treatment themselves. This distinction was clearly confirmed by fact-checkers across the political spectrum, including Politifact (Lean Left bias) and Breitbart (Right Bias), shortly after the comments were made.

During a campaign event in 2020, then-presidential candidate Joe Biden falsely claimed that Trump said “maybe if you drank bleach you may be okay.”

This debate continues in 2022, as some voices on the left continue to say that Trump told people to inject bleach.

Ethan Horowitz is an AllSides news assistant. He has a Lean Right bias.