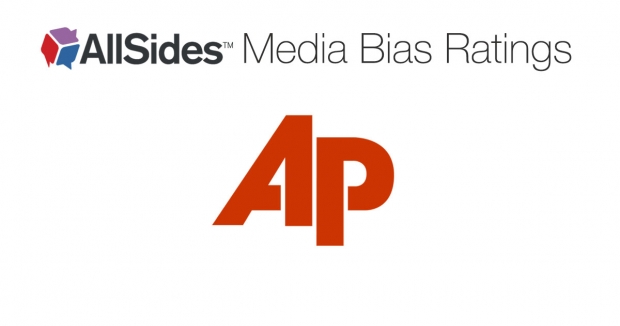 After months of research and analysis, including blind bias surveys conducted with nearly 4,000 people across the political spectrum as well as AllSides editorial reviews, AllSides found Associated Press news coverage of US politics has a Lean Left bias. AllSides now rates AP’s Politics and Fact Check sections as Lean Left. We separately rate AP News — its coverage of general news and world events — as Center.

That means if you're reading content from the Associated Press' politics section or its Fact Check section, it has a Lean Left bias. If you're reading general news on world events or other content, it's Center.

We are somewhat saddened to report this because AP has long been considered a gold standard of traditional journalistic ideals of balance, fairness, objectivity and integrity. AP still does a great deal of excellent journalism and is widely considered to be a go-to resource for news in the US and around the world. AP is a wire service, meaning its articles are published in other national and local outlets worldwide. That makes its decline from traditional journalistic ideals of balance and fairness in its political and fact check content so impactful and rather unfortunate.

Note that Center doesn’t mean better than a left or right-rated source. News sources with left or right bias play an important part in our national dialogue and media landscape, and they often highlight important news, issues, and perspectives that center sources miss. Bias is natural; hidden bias misleads and divides us. That’s why we work to make media bias easy to spot and transparent — so that people can consume a diverse news diet, properly understand what is going on, find the truth, and decide for themselves.

But since AP specifically strives to be fair and unbiased, and influences the entire world of journalism with its standards and news reports, there is cause for concern when it displays an overall bias or agenda in any political direction.

AllSides has rated AP Fact Check as a Lean Left bias since April 2020. We sometimes provide separate bias ratings for different sections of the same news source if the source has a large audience and there are profound differences in bias among its sections. We now have added AP’s politics section, which primarily covers US politics, to that Lean Left rating. We will periodically re-evaluate AP’s Politics and Fact Check content as news source bias can and does shift over time.

You can also email us feedback.

About Our Latest AP Bias Review

We concluded that in U.S. politics coverage, AP often reported with a left-leaning perspective and story choice. AP Politics very constantly included subjective analysis in political news coverage, often analyizing or framing the story in a way that couldn’t be objectively inferred from available facts and amounting to interpretation.

Our August 2020 blind bias survey of people across the political spectrum found that a plurality of respondents from every political group surveyed found AP News’ content to be Center, with a close second rating being Lean Left. On average, people who reported their own personal political bias as being Left, Lean Left, or Center saw AP’s bias as Center but close to the border between Lean Left and Center; people who identified as Lean Right and Right saw AP’s bias as clearly Lean Left. All groups on average rated AP as between Center and Lean Left.

This differs slightly from the results of our February 2020 blind bias survey, in which participants across the spectrum on average rated AP’s media bias as Lean Left (with respondents on the left seeing AP as closer to Center). Once again, the results were very close to the border line between Center and Lean Left. At the time, AllSides conducted an Editorial Review of AP, in which we decided to keep AP’s bias rating as Center, but noted that AP’s bias is on the left side of center.

Why the difference in survey results? Blind bias surveys are excellent for getting an accurate review from participants because they hide the publisher’s name and brand. Participants only see the content, not the publisher. However, they only see a snapshot of content from one or two days of publication. Bias varies day to day, week to week. When we do an editorial review, our multi-partisan team reviews content from many different days, weeks and months, and can also evaluate the impact of photos and prominence/placement of stories on the website.

Our additional editorial review led us to keep the bias rating for AP News overall at Center (though on the left edge of Center), and to separate AP Politics and Fact Check, since they clearly demonstrated a more Lean Left bias.

Read more about the bias of AP News and AP Politics and Fact Check, including past reviews and data.

AllSides has rated the bias of hundreds of media outlets and writers — view all media bias ratings here.