One day after Russian President Vladimir Putin signed a series of treaties annexing four Ukrainian regions, Ukrainian troops encircled Lyman, a strategically important town for the Russian invaders in the Donetsk region, one of the four regions Russia annexed. Moscow ordered a withdrawal of the thousands of troops in the town, marking another defeat in the month-long Ukrainian counteroffensive that has erased Russian gains in the northeast portion of the country.

The fighting, in the eyes of the Kremlin now waging on Russian soil, is the first test of Russian ultimatums. Russian doctrine authorizes the use of nuclear weapons if Russian land is threatened. Ukraine, who has denounced the referendums held in the annexed regions as illegitimate, vows to continue their push into the occupied regions. Western European powers and the United States have also condemned the annexation, with Washington announcing a new round of economic sanctions on Friday in response to Putin’s decree. Ramzan Kadyrov, Head of the Chechen Republic and Moscow ally, responded to the defeat by calling for Russia to consider using “low-yield nuclear weapons” to turn the tide of the war back in Russia’s favor.

News of the Ukrainian advance was covered widely across the spectrum, slightly more prominently by left outlets. A good deal of coverage of the war also focused on a series of Russian attacks on civilian car convoys, with the New York Post (Lean Right Bias) reporting on one in Zaporizhzhia that killed 30, and another in southeastern Ukraine that killed 20.

Russia has withdrawn its troops from the strategic Ukrainian town of Lyman, in a move seen as a significant setback for its campaign in the east.

The retreat came amid fears thousands of soldiers would be encircled in the town, Russia's defence ministry said.

Recapturing Lyman is of strategic significance for Ukraine.

The town had been used as a logistics hub by Russia, and could give Ukrainian troops access to more territory in the Donetsk and Luhansk regions. 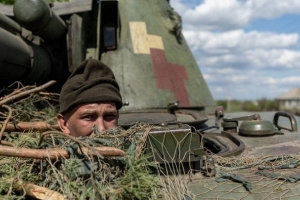 Russia suffered another setback during Ukraine's counteroffensive, confirming it withdrew troops from the eastern town of Lyman, within the newly annexed Donetsk region.

Ukraine’s armed forces on Saturday said they had "liberated" five settlements in the Donetsk region and encircled thousands of Russian soldiers.

"Due to the risk to be encircled, the allied forces were withdrawn from Krasny Liman to more advantageous frontiers," Russia's Ministry of Defense said Saturday.

"The Russian troops in the area of Lyman are encircled. Yampil, Novoselivka, Shandryholove, Drobysheve, and Stavky settlements are liberated. Stabilization measures... 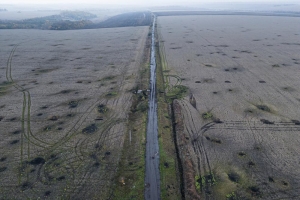 After being encircled by Ukrainian forces, Russia pulled troops out Saturday from an eastern Ukrainian city that it had been using as a front-line hub. It was the latest victory for the Ukrainian counteroffensive that has humiliated and angered the Kremlin.

Russia’s withdrawal from Lyman complicates its internationally vilified declaration just a day earlier that it had annexed four regions of Ukraine — an area that includes Lyman. Taking the city paves the way for Ukrainian troops to potentially push further into land that Moscow now illegally claims as its...