Tracking the Paths of Ukraine's Refugees

The United Nations says that over 4 million Ukrainians have fled the country amid Russia's invasion as of this week. Where have they gone?

Over 2 million have crossed the border into neighboring Poland since late February, boosting Poland from #101 to #2 on the list of countries with the most refugees within its borders. Another 620,000 have fled to Romania, and over 390,000 more have fled to Moldova. Some 350,000 have also fled to Russia, according to the U.N., which says it has established safe evacuation routes for people entering from Ukraine. Hundreds of thousands have also fled to Hungary and Slovakia.

Reports across the spectrum have tracked the flight of Ukrainian refugees. Some coverage, especially from right-rated sources, frames Ukrainian refugees seeking entry at the U.S.-Mexico border as an issue that could lead to more overcrowding and delays in migrant processing. 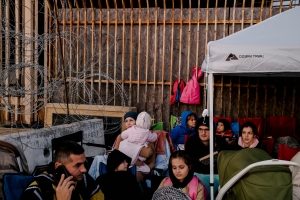 More than 2,000 Ukrainians have made their way to the U.S. border from Mexico over the past 10 days, joining desperate migrants from around the world in what officials expect could become a major border surge as pandemic restrictions are lifted and the continuing fallout from Russia’s invasion of Ukraine reaches America’s shores.

The sudden arrivals in Tijuana present an immediate challenge to U.S. border officials, who are already bracing for a flood of unauthorized migration from countries such as Honduras and Haiti when the United States eases its emergency Covid-19...

Read full story
Some content from this outlet may be limited or behind a paywall.
See full media bias rating for New York Times (News)
From the Center
314
World
How many Ukrainians have fled their homes and where have they gone?
BBC News 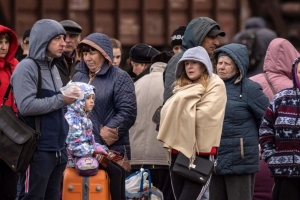 Thousands of people are trying to leave eastern Ukraine ahead of an expected Russian offensive in the region.

More than 10 million people are already thought to have fled their homes in Ukraine because of the invasion, according to the United Nations.

As well as the 4.3 million who have left for neighbouring countries, another 6.5 million people are thought to be displaced inside the war-torn country itself.

Where are people fleeing inside Ukraine?

Ukraine's deputy prime minister has warned people in large parts of the east of the country... 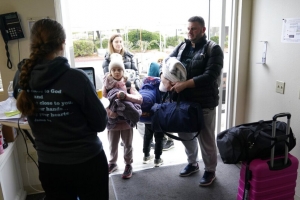 Mexican authorities have converted a sports complex near the U.S. border into a shelter to house the wave of thousands of Ukrainian refugees fleeing war-torn Ukraine and seeking to enter the United States.

Roughly 1,700 Ukrainian refugees have descended on Tijuana, Mexico, in recent weeks hoping to claim asylum to enter the U.S., according to Mexican authorities. Hundreds of these Ukrainian asylum-seekers in need of housing were transferred to the temporary shelter less than a 2-mile walk to the San Ysidro Port of Entry, Mexican officials said on Monday.

"They will continue to arrive," Enrique Lucero, Tijuana's migration...