FIFA World Cup Kicks Off In Qatar Amid Numerous Controversies

The FIFA World Cup kicked off today in Qatar. It is the first time the tournament is being held in a Middle Eastern country, and the lead up to the tournament has been mired in controversy regarding corruption, alleged human rights abuses of migrant workers that constructed the stadiums, and alleged persecution of the gay community of Qatar.

Key Quotes: On Saturday, FIFA president Gianni Infantino accused Western nations and media of hypocrisy for bringing light to controversies surrounding the tournament, stating, “I think for what we Europeans have been doing the last 3,000 years we should be apologizing for the next 3,000 years before starting to give moral lessons to people.” A writer in the New York Times (Lean Left Bias) characterized Infantino’s frustration as “somehow fitting, too. This is a tournament, after all, where almost everyone appears to be unhappy.”

For Context: The FIFA World Cup is held every four years. The last World Cup, in 2018, was won by France. The United States has never won a World Cup. The U.S. Department of Justice indicted nine FIFA officials and five corporate executives on charges of racketeering, conspiracy and corruption in 2015.

How the Media Covered It: Coverage leading up to the World Cup was focused nearly exclusively on the controversies surrounding the event. As the tournament kicks off, coverage is shifting to focus on the sport instead of the surrounding drama.

Qatar is taking the heat for FIFA corruption
Washington Post 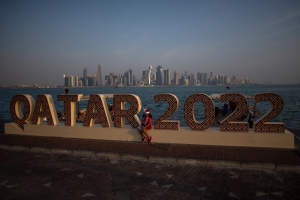 The FIFA World Cup gets underway this week. Normally, the pretournament talk would have focused around which soccer players are set to catch the global imagination and which country’s team will earn the much coveted mantle of world champion.

Not this time. Much of the discussion has centered instead on the host nation, Qatar, and whether it should have been selected for the privilege of putting on the most watched sporting event on earth. Qatar is by far the smallest country ever to host the World Cup — and many... 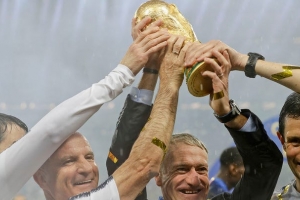 The FIFA World Cup is the biggest soccer tournament in the world. It runs every four years and for the final time it will have 32 teams fighting for the championship.

Qatar’s hosting of the World...

This year's FIFA World Cup in Qatar is gearing up to be a hot spot for governments spying on their adversaries, researchers and officials cautioned this week.

Driving the news: Cybersecurity firm Recorded Future released a report Thursday warning that state-sponsored hacking groups are likely to see the World Cup as "target-rich environment" for spying on foreign dignitaries and businesspeople.

European data protection regulators have been advising their constituents against downloading Qatar's World Cup apps due to surveillance and national security concerns.

German authorities said one of the apps "collects...