Senate GOP Primary in Pennsylvania Too Close To Call

The Pennsylvania Senate Republican Primary is too close to call, with celebrity doctor Mehmet Oz holding a 2,678 vote margin over hedge fund CEO David McCormick with 94% of the precincts reporting.  If the margin if less than .5% when all the votes are counted, an automatic recount would be triggered.

More than 805,000 Pennsylvania voters requested mail-in ballots, which are still being counted, and more than 103,000 voters requested absentee ballots. The final outcome is also delayed by a printing error in Lancaster County, where about 22,000 ballots were not able to be read by scanners. If Mehmet Oz wins, it will indicate that some fears about his conservative credentials were relieved after former President Donald Trump endorsed him. Whoever wins the GOP primary will face Lieutenant Governor John Fetterman, who won the Democratic primary for Senate. Fetterman voted from the hospital, where he received a pacemaker and defibrillator on Tuesday after he suffered a stroke last week. 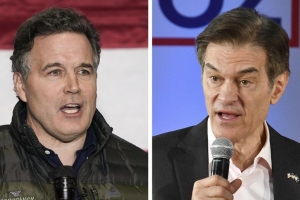 Mr. McCormick appeared to supporters at his campaign headquarters near midnight and told them he expected to win, but not tonight.

“We’re gonna win this campaign,” he told the cheering crowd before telling them that there were still “tens of thousands” of early votes still to be counted, starting Wednesday.

”Unfortunately, we’re not gonna have a resolution tonight, but we see a path...

Read full story
Some content from this outlet may be limited or behind a paywall.
See full media bias rating for Washington Times
From the Center
308
Elections
The Hill’s Morning Report — Pennsylvania Senate race goes to overtime
The Hill

Pennsylvania will have to wait a little longer to find out who the GOP’s Senate nominee will be this fall. Candidates Mehmet Oz and David McCormick todayare deadlocked in the Keystone State and the winner is pending as a potential recount looms.

As of press time, Oz leads McCormick by a margin of 2,672 votes (0.2 percent) with 94 percent of precincts reported. Both campaigns told supporters late Tuesday night that they are standing by and awaiting a result.

“We’re not going to have a result tonight. … “When all the votes are tallied, I am...

(CNN)Pennsylvania Republicans chose an election denier Tuesday as their candidate for governor in this year's midterm elections -- but appear to have rejected a far-right Senate contender.

As of early Wednesday, Mehmet Oz, the celebrity heart surgeon endorsed by former President Donald Trump, and retired hedge fund executive David McCormick are locked in a neck-and-neck battle in the Republican Senate primary that could take days to sort out. Conservative Kathy Barnette, who many Republican officials worried would surge past Oz and McCormick despite concerns about her electability, was in third place.