The feud between California Governor Gavin Newsom and Florida Governor Ron DeSantis, both of which are rumored to be considering a Presidential run in the near future, has escalated following the transporting of migrants to northern Democrat-run cities by southern Republican politicians. A surge in immigration at the southern border has become a leading issue in the lead up to the midterm elections, and the latest action by select Republican politicians has elicited much scorn from Democrats.

This past week, Newsom sent a letter to the Department of Justice asking for an investigation into both DeSantis and Texas Governor Greg Abbott, alleging the prominent Republican figures are using child migrants as “political pawns.” This was followed soon after by a tweet from Newsom challenging DeSantis to a televised debate to take place before the midterm elections, in which both Governors are up for reelection.

“Hey [DeSantis] clearly you're struggling, distracted, and busy playing politics with people's lives,” the tweet stated. “Since you have only one overriding need -- attention --let's take this up & debate. I'll bring my hair gel. You bring your hairspray. Name the time before Election Day.” The hair comment was in response to DeSantis joking that Newsom’s hair gel was “interfering with his brain function” at a news conference in Florida.

The feud was covered across the spectrum, with most sources focusing specifically on the debate challenge from Newsom. 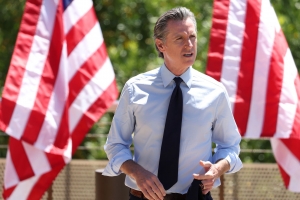 The big picture: It's the latest in a clash between Republican politicians, who oppose President Biden's immigration and border policies, and Democrats, who have slammed tactics to transport migrants as a political ploy.

Republicans are particularly taking aim at sanctuary cities and sending migrants there to test their values and force them to grapple with social safety-net issues,... 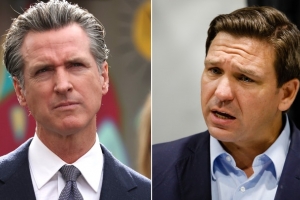 "Hey @GovRonDeSantis, clearly you're struggling, distracted, and busy playing politics with people’s lives. Since you have only one overriding need -- attention --let's take this up & debate. I’ll bring my hair gel. You bring your hairspray. Name the time before Election Day," Newsom tweeted on Friday. 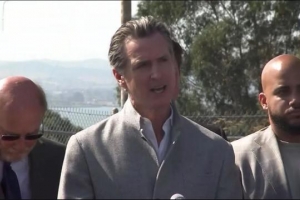 "The governor of California sent a letter to the Department of Justice to investigate Texas and Florida governors and all I can say is, I think his hair gel is interfering with his brain function," the Florida governor said.

In response, Newsom challenged DeSantis to a debate before Election Day.

"Hey Governor Ron DeSantis clearly you're struggling, distracted, and busy playing politics with people's lives. Since you have only one...