After Netflix announced on Monday that it would partner with former President Barack Obama and former First Lady Michelle Obama to create content for the streaming site, some have expressed concern over the media giant's political leanings, although Mr. Obama says he plans to promote stories that help bridge the political divide.

See Today’s News »   More Headline Roundups »
From the Center
4815
Arts and Entertainment
Conservatives Threaten Netflix Boycott Over Obama Deal: 'I Will Read the Bible Instead'
Newsweek 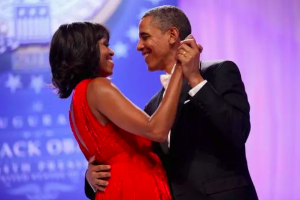 Some conservatives are threatening to boycott Netflix after the streaming giant announced Monday it signed former President Barack Obama and former First Lady Michelle Obama to a multi-year development deal.

Read full story
Some content from this outlet may be limited or behind a paywall.
See full media bias rating for Newsweek
From the Center
4815
Arts and Entertainment
Obama plans to use Netflix deal to stop political divisiveness
The Hill

Former President Obama said Wednesday he plans to use his new production deal with Netflix to combat political divisiveness.

Netflix solidified its reputation as a liberal entertainment powerhouse with the announcement Monday that former President Barack Obama and former first lady Michelle Obama have signed on to produce a raft of new programming for the content conduit under their Higher Ground Productions shingle, and some conservative consumers aren't happy about it.

Three men died while attending a country music festival in Brooklyn, Michigan, and two more were critically injured, in what is believed to be a carbon...

The court decision freeing Bill Cosby, explained as best we can
ANALYSIS

Bill Cosby was released from prison Wednesday after his conviction on sexual assault charges was overturned by Pennsylvania's highest court. The 83-...

Fewer Than 2% Of Movie Characters Are Muslim, Report Finds
ANALYSIS

Fewer than 2% of movie characters with speaking roles are Muslim, according to a study released on Thursday.  The study, which examined 200 popular...

NBC Won’t Air The Golden Globe Awards In 2022 Following Criticism Of The HFPA's Lack Of...

NBC announced on Monday that it will not broadcast the 2022 Golden Globe Awards following months of criticism around the lack of diversity in the Hollywood...

Disney and Marvel’s superhero adventure “Black Widow” captured a massive $80 million in its first weekend, crushing the benchmark for the biggest box...

Nikki Beesetti started investing in crypto back in 2017 and paid off her final semester at Purdue University with proceeds from the sale of a single bitcoin...

In a statement issued to Deadline by Smith and director Antoine Fuqua, the pair said they felt "compelled" to act. "We cannot in good conscience provide...

The Disney-owned studio Searchlight pressured the American magazine Filmmaker to remove a quote from its profile of Chinese director Chloé Zhao...

Journalist Lied To Get Princess Diana Interview, BBC Covered It Up – Report

An inquiry into how the BBC got a sensational 1995 interview with Princess Diana in which she disclosed intimate details of her failed marriage found on...