Finland’s leaders called for the country to join NATO “without delay” on Thursday amid growing fears that Russian aggression would expand beyond Ukraine.

“We hope that the national steps still needed to make this decision will be taken rapidly within the next few days,” Finnish President Sauli Niinisto and Prime Minister Sanna Marin said in a joint statement, adding that both Finland and NATO would be “strengthened.” Russian officials called the move a “threat to Russia,” and some Finnish politicians warned that Russia could cut off natural gas pipelines to the country.

NATO membership has long been controversial in Finland and neighboring Sweden, which is also considering joining the alliance. However, public support for joining NATO skyrocketed in Finland since Russia’s invasion of Ukraine, from about 20% to 76%. Joining NATO would effectively end decades of Finnish neutrality between Russia and the West — although that arrangement was not without its tensions.

Coverage was widespread on Thursday. While most coverage was fairly similar across the spectrum, one article from Fox News (Right bias) stood out by directly describing NATO expansion as “a contributing factor as to why” Russian President Vladimir Putin decided to invade Ukraine. 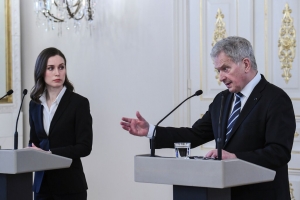 Finland’s prime minister and president announced their support on Thursday for the nation to apply to join NATO.

President Sauli Niinisto, who is mostly responsible for Finland’s foreign policy, has helped orchestrate Finland’s move away from a long history of military nonalignment, prompted by the Russian invasion of Ukraine on Feb. 24.

“Finland must apply for NATO membership without delay,” they said. “We hope that the national steps still needed to make this decision will be taken rapidly within the next few days.”

Read full story
Some content from this outlet may be limited or behind a paywall.
See full media bias rating for New York Times (News)
From the Right
314
World
Finland president, prime minister urge the country to apply for NATO membership 'without delay'
Fox News (Online News) 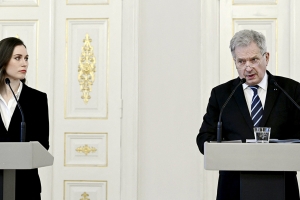 The president and prime minister of Finland, a country on the border of Russia, released a statement backing an application for membership in the North Atlantic Treaty Organization (NATO) Thursday amid the Kremlin's aggression on Europe's eastern flank, particularly in Ukraine. Russian President Vladimir Putin's spokesman issued an ominous statement on the move.

They called for the country to proceed... 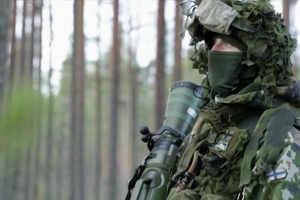 The president and prime minister of Finland released a joint statement on Thursday laying out their intention to bring Finland into the NATO alliance following Russia's invasion of Ukraine.

"As a member of NATO, Finland would strengthen the entire defence alliance," President Sauli Niinisto and Prime Minister Sanna Marin said in the statement.