Coverage from all sides of the political spectrum compared Biden's diversity numbers to the Trump campaign's numbers. Coverage from both the right and left focused on the specific percentage as well; some headlines from right-rated outlets included "only 35 percent," and some coverage from left-rated outlets highlighted calls for greater diversity in Biden's staff. 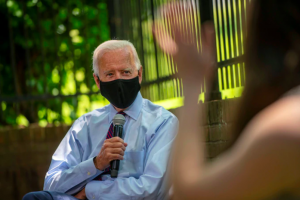 Thirty-five percent of presumptive Democratic presidential nominee Joe Biden’s campaign operation are people of color and just over half are women, according to figures released Saturday under public prodding, after months in which his campaign declined to make that information public.

Read full story
Some content from this outlet may be limited or behind a paywall.
See full media bias rating for Washington Post
From the Center
308
Elections
Biden campaign says 36 percent of senior staff are people of color, Trump campaign has 25 percent
The Hill

Presumptive Democratic presidential nominee Joe Biden's campaign has more people of color among its senior staff than President Trump's reelection effort, according to data regarding the diversity of their staffs.

Presumptive Democrat presidential nominee Joe Biden has released his staff’s diversity statistics, revealing his team is not as diverse as he has claimed. The candidate released these numbers Saturday immediately after a town hall, during which officials called for him to back his diversity claims within his staff.

The former vice president has received mounting pressure to release these figures, but has refused to make this information public for months.

However, he has long boasted his team’s representation.