Media Bias, Border Crisis, Immigration
Save for Later
From The Right 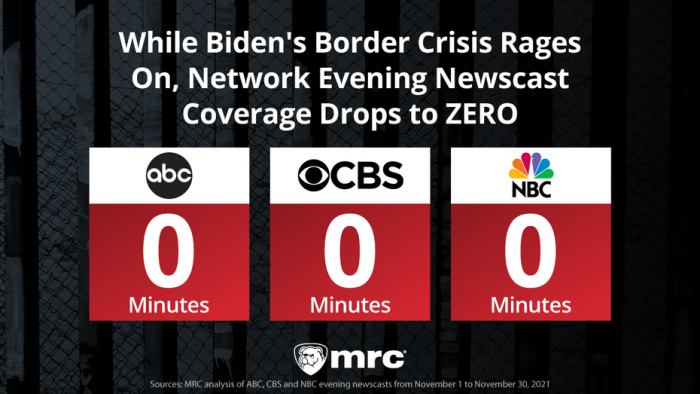 The crisis at the border is still spiraling out of control and the liberal news networks are determined to smother any mention of it. According to statistics from U.S. Customs and Border Security, there were 173,600 encounters along the southern border in November. This is a five percent increase over October. Yet, the evening newscast coverage dropped to a shocking zero. Zero minutes and zero seconds on ABC’s World News Tonight, the CBS Evening News and the NBC Nightly News.

That’s down a stunning 100 percent from March when the same network newscasts felt they couldn’t ignore the deteriorating crisis at the border. That month, there was a whopping 113 minutes of coverage for 173,281 encounters.

The network evening newscasts were interested in some border clashes in November, but they were in Europe. All three networks repeatedly covered the dispute between Belasrus and Poland. On November 16, World News Tonight’s David Muir opened the show by worrying: “Overseas, tonight, our team on the scene of the violent clash involving migrants at the border separating Belarus and Poland.” This is an important story, but it’s depressing that journalists thought it was the only border crisis worth covering.