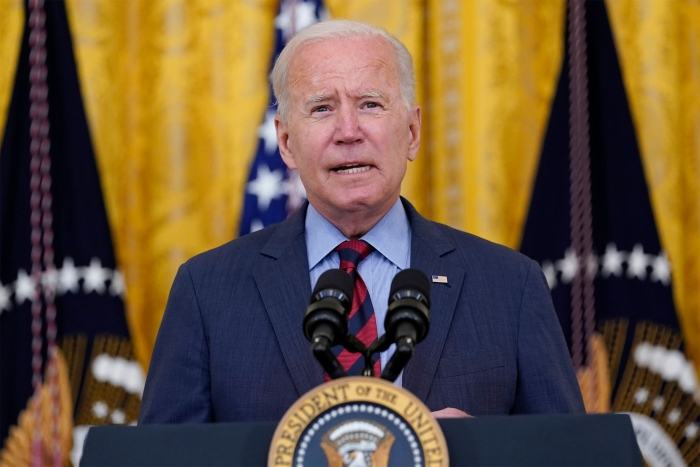 President Biden on Tuesday called on New York Gov. Andrew Cuomo to resign after an official report found that he sexually harassed 11 women.

“I think he should resign,” Biden said of his longtime political ally.

Biden said in March that Cuomo should step down if a probe commissioned by New York Attorney General Letitia James, a fellow Democrat, concluded that the governor was guilty.

ABC News host George Stephanopoulos asked Biden at the time, “If the investigation confirms the claims of the women, should he resign?”

NEWS
Joe Biden Is Down to Tax the Richest of the Rich. Congress? Not So Much.
Mother Jones

Biden in a bind on the border: 'The politics finally got the better of their policy'

Joe Biden Is Down to Tax the Richest of the Rich. Congress? Not So Much.
OPINION

According to a story from the New York Times earlier this week, the Biden administration is pushing stats based on an “unconventional”...

The mass of thousands of Haitians at the U.S. southern border has put the Biden administration in the exact place it’s tried to avoid: knee deep in immigration...

A human-rights catastrophe has taken shape on the border in Texas -- and it has happened on the Biden administration's watch. Monday, the nation saw horrifying...

Border Agents 'Dumbfounded' by Biden's Make Them 'Pay' Remark About...

French President Emmanuel Macron agreed on Wednesday to return the French ambassador to Washington after pulling him in protest of a nuclear submarine deal...

President Biden is expected to announce Wednesday that the U.S. will purchase 500 million additional doses of the coronavirus vaccine developed by ...

The rising price of beef offers a meaty lesson on the limits of the government's ability to combat inflation by throwing more money at the problem. Even in...

What’s the problem at the border? Is it the squalid migrant encampment under an international bridge in Del Rio, Texas, that grew to some 15,000 Haitians over...

Rep. Alexandria Ocasio-Cortez said a search by the Biden administration for a contractor to run a detention facility for migrants at...

Republicans File 3 Articles of Impeachment Against Biden: 'Shot Across the Bow'

Several Republican House members are calling for the impeachment of President Biden, based on "clear violations of his duties as president." They admit the...