Immigration, Supreme Court, border wall
Save for Later
From The Left 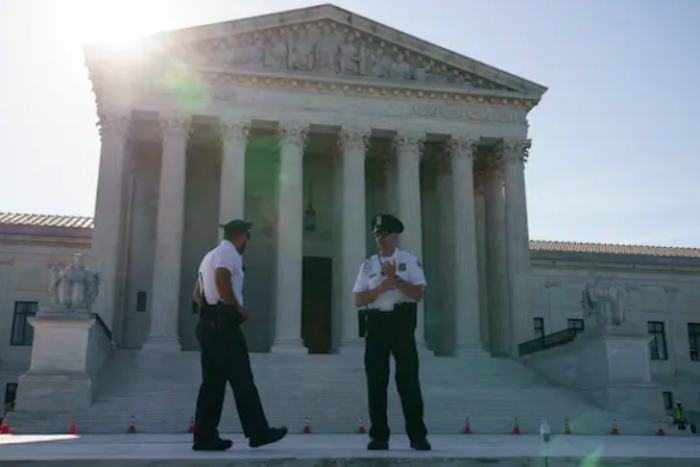 The Supreme Court neared the end of its decision-making for the term on Tuesday, ruling against immigrants who say they face persecution or torture in their home countries if they are deported and for the builders of a proposed natural gas pipeline spanning Pennsylvania and New Jersey.

The court will release its final decisions Thursday, including a closely watched election-law case from Arizona that will provide guidance on protections afforded by the Voting Rights Act.

Read full story
Some content from this outlet may be limited or behind a paywall.
Immigration, Supreme Court, border wall

The SERIES: Immigration and Citizenship

The Biden administration on Tuesday announced U.S. immigration authorities will no longer carry out mass arrests of unauthorized immigrants at work sites,...

‘People will always come’: Inside a Haitian’s journey without end

The scene has played out over and over again at the southern border since January: Cross the river, find a shaded spot and wait for Border Patrol to arrive so...

Most people in US favor Afghan ally refugees: AP-NORC poll

Most people in the U.S. want to see Afghans who worked with Americans offered resettlement in the United States, a new poll shows, confirming support across...

How much blame does Biden shoulder for immigration struggles?

When President Biden took office, he vowed to “undo the moral and national shame” of the Trump administration’s hard-line approach to immigration. But in the...

The Biden administration is planning to reinstate former President Donald Trump’s “Remain in Mexico” policy in November, CBS News reported on Friday. A...

At least 160,000 illegal immigrants have been released into the U.S., often with little to no supervision, by the Biden administration since...

President Joe Biden and his administration have misled Americans about the situation at the southern border multiple times since taking office, according to...

Border Patrol Union’s Judd: ‘I’ve Never Seen the Morale Any Lower than It Is Right Now’

Even though President Joe Biden has been in office only eight-and-a-half months, his policies have had a remarkably negative impact on the morale of the Border...