Florida's coronavirus outbreak is getting worse 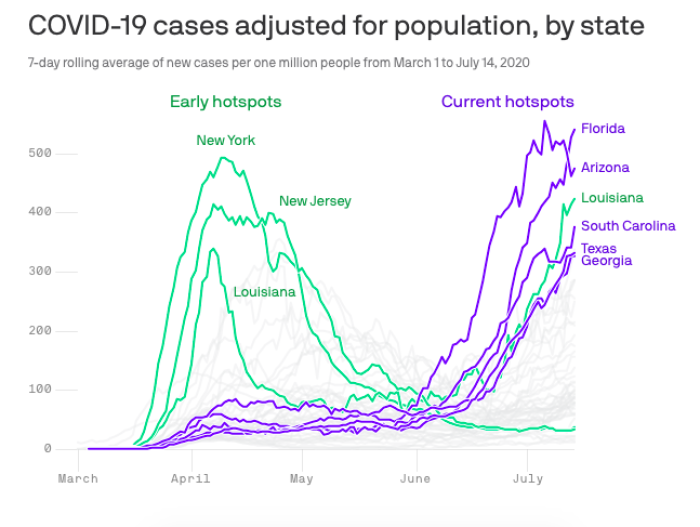 Between the lines: Deaths lag several weeks behind new cases, and cases are skyrocketing.

The state on Sunday announced more than 15,000 new cases, shattering the single-day case records in New York and California.
Florida now has more confirmed cases, adjusted for population, than New York ever had — although New York's true caseload was almost certainly multiple times higher than its official one.

Zoom in: "Miami is now the epicenter of the pandemic. What we were seeing in Wuhan five or six months ago, now we are there,”...

NEWS
China, WHO Could Have Acted Sooner To Prevent Pandemic, COVID-19 Probe Finds
The Daily Caller

Asia Was a Model for How to Deal With COVID-19. Why Is It Lagging in Vaccine Rollouts?

Since the first major outbreak last February, South Korea’s COVID-19 response has been a model for other nations—its government praised for its ability to...

What’s Happening To Rebekah Jones, The Florida Data Scientist Who Was Just Arrested

On January 17, Rebekah Jones turned herself in to Florida police after they issued a warrant for her arrest. She was charged with one count of offenses against...

COVID Lockdowns May Have No Clear Benefit vs Other Voluntary Measures, International Study Shows

Astudy evaluating COVID-19 responses around the world found that mandatory lockdown orders early in the pandemic may not provide significantly more benefits to...

Panel: China, WHO should have acted quicker to stop pandemic

A panel of experts commissioned by the World Health Organization has criticized China and other countries for not moving to stem the initial outbreak of the...

While millions wait for a life-saving shot, the U.S. death toll from the novel coronavirus continues to soar upwards with horrifying speed. Today, the last...

Where Teachers Are Eligible for the COVID-19 Vaccine
ANALYSIS

Coronavirus vaccines are now rolling out across the country, and health-care workers and older people have been among the first to get their shots. Teachers...

Under Gov. J.B. Pritzker's COVID-19 rules, the state's 11 regions were under four different classes of mitigations on Monday, leading to some confusion among...

US Scientist Who Led Charge Against COVID Lab Leak Theory Admits He Was Trying To Protect Chinese...

The U.S. scientist behind an effort to stymie debate surrounding the possibility that COVID-19 could have accidentally escaped from the Wuhan Institute of...

Secretary of State Mike Pompeo late Friday revealed previously unreported intelligence that may link a lab in Wuhan, China, to the start of the global...

Chicago Mayor Lori Lightfoot on Thursday said she wants restaurants and bars in her city to open for indoor services as soon as possible. She plans to discuss...