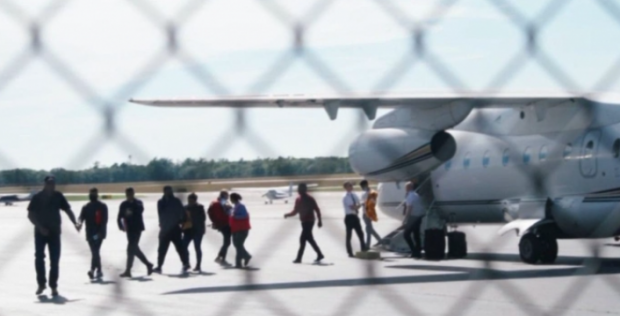 While it is impossible to predict the outcome of this fall’s elections, there has never been a midterm campaign in modern political history where the landscape has shifted so rapidly. The Supreme Court’s decision to overturn Roe vs. Wade, combined with the heightened presence of Donald Trump as a result of the January 6 congressional hearings and the FBI’s search of Trump’s Mar-a-Lago resort for confidential documents, have dramatically upended a political landscape on which Republicans once seemed poised for sweeping victories but now sees a Democratic surge that puts at least the Senate majority in real question.

So last week, Republicans changed the subject. Knowing that ongoing conversations about abortion and Trump were doing them no good at all, GOP governors Ron DeSantis of Florida and Greg Abbott of Texas – both potential presidential contenders – last week escalated their ongoing practice of sending large numbers of newly-arrived immigrants to northern Democratic-voting cities. Previously, the two governors, along with fellow chief executive Doug Ducey of Arizona (another presidential hopeful) had been transporting migrants from their states to larger metropolitan areas like New York, Chicago, and Washington, D.C.

But this time, DeSantis and Abbott raised the political stakes and reshaped the national political conversation in the process. DeSantis directed two plans full of asylum seekers to the noted liberal vacation spot of Martha’s Vineyard, Massachusetts. Abbott’s targeting was even more precise, instructing busloads of migrants to be deposited on the street directly in front of the U.S. Naval Observatory in Washington, Vice President Kamala Harris’ official residence. After weeks in which the political discourse was dominated by discussions of Democratic priorities like reproductive rights and Trump’s legal challenges, now candidates and elected officials of both parties are talking about immigration policy, an issue that strongly benefits Republicans.

Earlier this year, GOP politicians were spending much of their time focusing on economic issues, specifically relating to high gasoline and food prices. But as inflation has eased, they have shifted their emphasis to voter concerns about crime and immigration. DeSantis’ and Abbott’s high-profile gambits move the discussion back in their party’s favor, which not only helps their own re-election campaigns but will earn the gratitude of Republican House and Senate candidates across the country. Those are chits that will come in handy in a future presidential campaign.

For the most part, Democrats have swallowed the bait. Joe Biden’s White House reacted with outrage, as did House Speaker Nancy Pelosi and other congressional leaders. California Governor Gavin Newsom, who seems to be preparing for a presidential effort of his own, has challenged DeSantis to a debate, an unusual maneuver even for a candidate whose own gubernatorial election is well-assured.

Less vocal have been Democratic politicians running in swing districts and purple states around the country. While the party base is greatly energized by the immigration debate, the voters in the center of the political spectrum who decide these elections are much less supportive of Biden’s efforts at the border. The more they hear about this issue, the less likely they are to support the president’s preferred candidates.

Days before the two governors acted, Republicans were reeling as a result of Senator Lindsey Graham’s proposal for a national ban on abortion after fifteen weeks of pregnancy. Ever since the Supreme Court’s decision last spring, most GOP leaders have attempted to deflect the issue by promising that there would be no effort to pass a nationwide prohibition and that each state would decide these matters for itself. Graham’s announcement, which appeared to have been his effort to reassure voters worried about the lack of exceptions for abortions in the case of rape, incest or circumstances where the mother’s life was in danger, quickly ignited a firestorm within his party.

The most strongly pro-life Republicans embraced Graham’s legislation, but most other GOP leaders immediately distanced themselves from it. Not only did the controversy deeply and visibly divide the party, but it spotlighted a policy debate that had fueled the Democrats’ comeback over the last several months. Republicans had worked very hard to de-emphasize the issue, and now Graham was reminding Americans that most of them disagreed with the GOP on this highly-charged issue.

So DeSantis and Abbott came to the rescue, by changing the subject from abortion to immigration. They have pledged to continue to send these caravans northward for the foreseeable future. We’ll see in the weeks ahead whether their efforts will be enough to keep the voting public focused on their preferred issue.