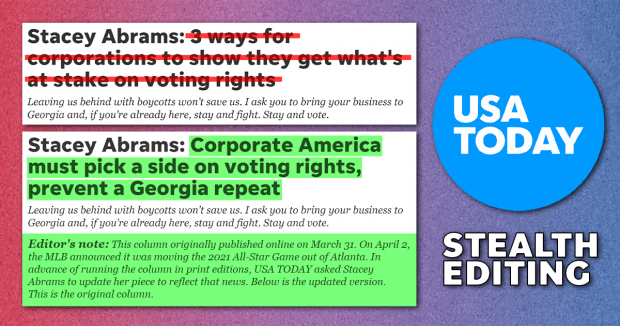 Mistakes are an inevitable part of journalism. But how publications fix those mistakes is more important and telling of their ethical principles. Gannett, the publishing company that owns USA TODAY (Center bias) and roughly 100 other local newspapers nationwide, apologized in a statement to Fox News (Lean Right bias) last week for a serious blunder: retroactively editing an op-ed by Georgia politician Stacey Abrams about voting rights and boycotts last month without leaving an explanation or Editor’s Note. Failing or delaying to explain edits after publication (a practice sometimes called “Stealth Editing”) can allow misinformation to spread, especially online. It also can damage the credibility of the source and its standing as a fair and honest broker of the news. Abrams’ piece was originally published on March 31. A few days later on April 2, Major League Baseball announced it would move its annual All-Star Game event out of Georgia over the state’s controversial new voting law. That loss will reportedly cost Georgia businesses up to $100 million. Following the MLB’s move, Abrams’ op-ed was updated to include much more cautionary language around boycotting Georgia businesses. New language urging alternatives to boycotts was also added and did not appear in the original article. Politically, these are significant additions. Abrams is a political leader in Georgia who was her party’s nominee for governor in 2018. She was “widely credited with boosting voter turnout in Georgia,” helping elect Joe Biden as well as two new Democrats in her state’s 2020 U.S. Senate races. She was also seen by some as a candidate for Biden’s vice presidential pick, and she may run for Georgia governor again next year. The new Editor’s Note says “USA TODAY asked Abrams to update her piece” three days after it was published to reflect the MLB’s announcement “in advance of running the column in print editions.” Based on this, it seems she was allowed to update the piece, and USA TODAY then failed to notice the significance of the changes and affix an explanation. Was this just an editorial lapse? Or did USA TODAY seemingly let Abrams save face? And whatever it was, why didn’t the publication explain the changes to readers immediately?

When a news outlet changes something that’s already been published, it raises some concerns. Did the outlet apologize quickly and take steps to avoid the problem in the future, or did they try to hide their mistake or give only a partial apology? What is behind the mistake and their apology? Was it an honest error, or was it in support of a biased partisan agenda? The generally-accepted process is to make the update or correction and use an Editor’s Note to explain that the article was changed or updated and why. The original Abrams op-ed, headlined “3 ways for corporations to show they get what's at stake on voting rights,” begins with this sentence:

“Boycotts work. The focused power of No, trained on corporate actors used to being told Yes, can yield transformative results.”

The edited article, headlined “Corporate America must pick a side on voting rights, prevent a Georgia repeat,” now begins like this:

“Boycotts work — when the target risks losing something highly valued and the pain becomes unbearable.”

In the original piece, Abrams made this statement, which was apparently removed from the article entirely as part of the edit:

“Until we hear clear, unequivocal statements that show Georgia-based companies get what’s at stake, I can’t argue with an individual’s choice to opt for their competition.”

In its place, several other points were added to the article retroactively following the MLB’s announcement, including:

“Boycotts invariably also cost jobs. To be sustainable, the pain of deprivation must be shared rather than borne by those who are least resilient. They also require a long-term commitment to action. The North Carolina boycott of 2016 didn’t stop with the election of Democrat Roy Cooper, and the venerable Montgomery Bus Boycott lasted 381 days, ending only with a Supreme Court decision.

Instead of a boycott, I strongly urge other events and productions to do business in Georgia and speak out against our law and similar proposals in other states.”

Such significant alterations to an influential political figure’s column post-publication are arguably unethical, especially in the absence of an explanation. USA TODAY did provide that explanation after they were criticized, which now sits atop the article. Still, Abrams could run for governor again as soon as next year. A trustworthy newspaper doesn’t allow potential candidates to save face or manipulate public perception without at least quickly offering its readers an explanation for why it happened. What makes the USA TODAY case especially notable is that it wasn’t a fact or spelling error that was resolved, as is the case when news reports are updated. Instead, the edits were to an advocacy column from a prominent politician. There were several additions, subtractions and changes to tone. And the unexplained changes directly followed a major news story on the matter. Any edits to an article, whether it’s from a national legacy news source or a local newspaper, should be accompanied by an explanation. What was changed or corrected? When? Why? What led to the change in the first place? An opinion piece from the Washington Examiner (Lean Right bias) points out that powerful media outlets may have elevated misinformation based on the unexplained edits:

“Some cited the quietly amended opinion article as ‘proof’ Abrams didn't encourage businesses to boycott Georgia. A PolitiFact fact check even quoted the article’s new anti-boycott language, presenting it as if it was something the Georgia Democrat said before the MLB announced on April 2 it would relocate the All-Star Game to Colorado…The narrative is set in stone. This is the news update Twitter provided to its millions of users this week: ‘Stacey Abrams encouraged Americans to invest in Georgia-based businesses after new voter laws were passed, according to journalists and fact-checkers.’”

In the viral age, it’s borderline impossible to dispel a narrative once it’s been run with on the internet. And clearly, it’s not just online trolls who latch onto false or incomplete stories. In this case, powerful media companies furthered “facts” about Abrams that were in reality much more murky. A simple Editor’s Note would have discouraged that. Ultimately, the companies that ran this information trusted in another news source, but that source let them and all of their audiences down. When just one trusted media outlet makes a mistake, the trickle-down effect can be vast.

Whenever we at AllSides make a retroactive change involving important facts or information, we affix an editor’s note explaining what was added/corrected and when. If it was something we believe could have amounted to misinformation, we’ll apologize and review the process that led to the error. Here’s an example. The note from Gannett/USA TODAY was a good response to the situation, but came too late. Other news sources had already run with the unexplained edits, potentially misleading a large number of readers on Twitter and elsewhere. This and other examples of stealth-editing show how sloppy journalism can easily lead to misinformation being elevated. Other outlets on both left and right — the New York Times (Lean Left bias) and the New York Post (Lean Right bias), for example — have also been accused of stealth-editing within the last year. Without a deeper understanding of what choices journalists make and why, the public can become deeply skeptical of the media as a whole. According to recent surveys about trust in the media from Pew Research Center (Center bias), clear and timely corrections on news stories “increases confidence in the work for vastly more people (51%) than say it makes no difference (36%) or decreases confidence (12%).” Edits and corrections are part of the news-making process. They should be done quickly and explained in full. But retroactively editing an article to change a politician’s previously-stated position is much more controversial. If Abrams changed her view on boycotts, perhaps an editor’s note could have been added to the article without changing the original text, or Abrams could have written a new op-ed. Letting politicians go back and twist their own words for political reasons is something that campaigns do, not news outlets. We credit USA TODAY for at least owning up to the mistake of forgetting an Editor’s Note, albeit after the misleading narrative spread. Other massive media companies, such as the New York Times in the case of the death of Capitol police officer Brian Sicknick, have infamously been much slower and less direct about apologizing for errors. We should give established news outlets the benefit of the doubt, even when mistakes are made. But to maintain a healthy information ecosystem, we as a media industry owe readers clear and obvious explanations whenever any changes are made to stories after initial publication — especially when regarding a politician’s stance on major current events. Henry A. Brechter is the managing editor of AllSides. He has a Center bias. DISCLOSURE: He and other members of the team have also written op-eds for USA TODAY. This piece was reviewed by John Gable, CEO and Co-Founder of AllSides (Lean Right), Julie Mastrine, Director of Marketing (Lean Right), and Joseph Ratliff, Daily News Specialist (Lean Left). Original image created by Joseph Ratliff