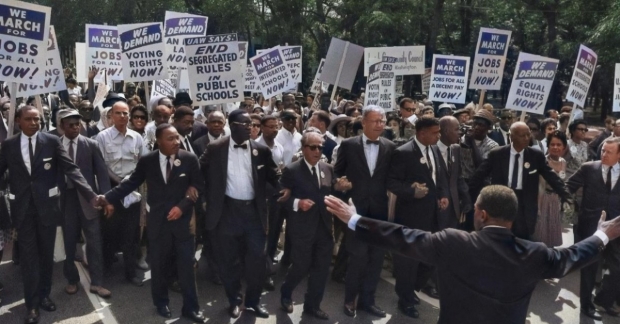 Here's a brief overview of both Donald Trump and Joe Biden's stances on race relations, plus quick links to articles covering the topic from across the political spectrum as determined by AllSides Media Bias Ratings.

President Donald Trump recently released his Platinum Plan for black Americans, which pledges to "increase access to capital in black communities by almost $500 billion." The money would be granted to black communities and entrepreneurs to increase capital access, and the plan promises to open 500,000 new black businesses and create 3 million jobs for black Americans. The plan also recognizes Juneteenth as an official holiday, and promises to “prosecute the KKK and ANTIFA as terrorist organizations and make lynching a national hate crime.” It also includes provisions for education and religious organizations in black communities; the president also pledged to work on a Second Step Act and a National Clemency Program.

Trump said in a speech that Democrats "take the black vote for granted," before stating, “I did more for the black community in 47 months than Joe Biden did in 47 years." Trump’s website also features a page titled "TRUMP CAMPAIGN STATEMENT ON BIDEN’S OFFENSIVE RACIAL HISTORY."

Democratic presidential candidate Joe Biden’s website features a plan to “build back better by advancing racial equity across the American economy”, and a “plan for black America.” Biden pledges to target racism in America by tackling economic inequality in minority communities. His plan includes efforts to spur more than $50 billion in additional public-private venture capital to minority entrepreneurs and an additional $150 billion by investing in small businesses, and to expand the Community Reinvestment Act to apply to mortgage and insurance companies.

Biden’s agenda for racial minorities promises to tackle inequality in many areas, including economic inequality, education, the justice system, healthcare, the COVID-19 crisis and housing. Biden’s website also touts his record of co-authoring the Civil Rights Act of 1990 to protect against employment discrimination, and his involvement in reauthorizations of the Voting Rights Act.

The Hill: Donald Trump has done more for African Americans than we think

Los Angeles Times: Trump and Biden couldn’t be more different on the complicated issue of race

ABC News: Trump vs. Biden on the issues: Racial justice

Fox News: Jack Brewer says Black Americans will turn out for Trump like no Republican before