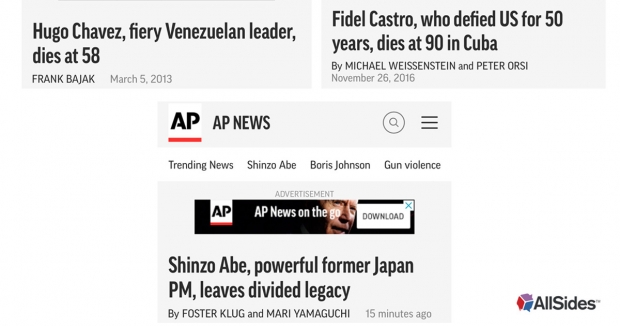 AllSides analysis confirmed that in reporting on the political leader in tweets and articles, media outlets employed subjective qualifying adjectives, slant, and analysis presented as fact, all common types of media bias.

NPR reportedly deleted a tweet that called Abe a “divisive arch-conservative.” The outlet then issued a new tweet calling Abe an “ultranationalist.”

Shinzo Abe, the former Japanese prime minister and ultranationalist, was killed at a campaign rally on Friday.

Police tackled and arrested the suspected gunman at the scene of an attack that shocked many in Japan. https://t.co/YpyEIM2Cim

When a journalist uses qualifying adjectives, they are suggesting a way for you to think about or interpret the issue, instead of just giving you the facts and letting you make judgements for yourself. Some adjectives can be verified through objective observation — “single-handedly,” “lone objector,” “lengthy bill” — but others, particularly political qualifiers, are subjective and reflect the perspective of the writer. They can be a source of sharp disagreement on the left and right.

Writing that someone is an “ultranationalist,” “far-right,” “far-left,” or an “extremist,” for instance, can paint a negative view of the figure, characterizing them as being on the fringes or outside the bounds of acceptable views.

Using such charged qualifiers can signal bias, be seen as a smear, and be fraught with disagreement on the left and right. A neutral journalistic piece would simply state policies the politician supported or opposed and would directly quote them on issues, allowing the reader to decide for themselves what they think — instead of the reporter issuing verdicts themselves.

“A polarizing figure, [Abe] was a right-wing nationalist and conservative and a fierce supporter of Japan’s military. He fought to amend the country’s pacifist constitution in the face of the rising threat from China. While in office, Abe met former President Donald Trump several times to reaffirm Japan’s military trade alliances with the United States. His political opinions were controversial, but the country is united in shock and sympathy at the news of his death.”

The Associated Press was also criticized for its coverage of Abe. Some noted AP’s difference in coverage when it came to the deaths of socialist leaders versus conservative leaders. The headline about Hugo Chavez’s death in 2013 called him “fiery,” and the headline about Fidel Castro’s death said he “defied the US for 50 years.” Meanwhile, AP’s headline about Abe said he left a “divided legacy.” 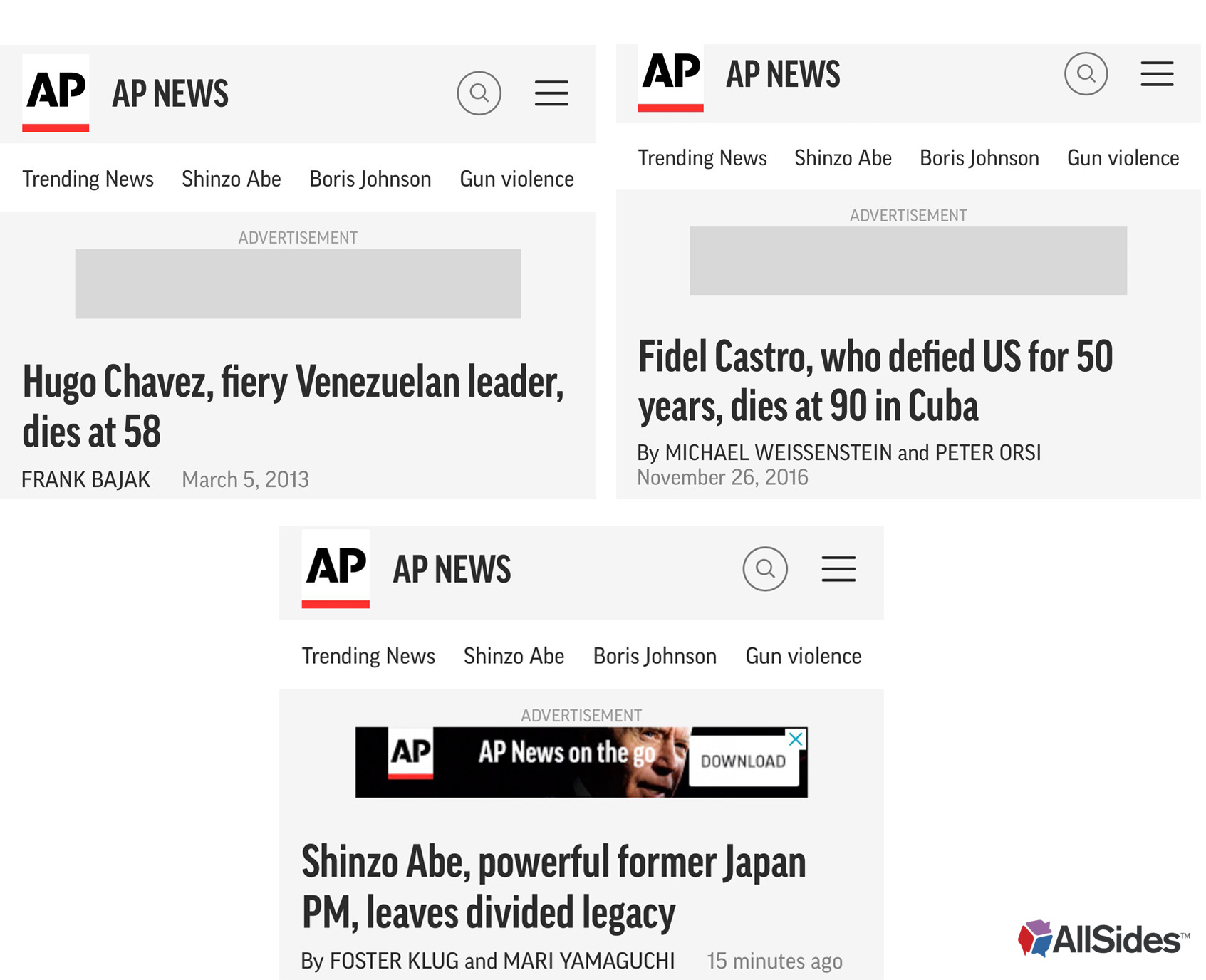 In AP’s writeup on Abe (below), he is characterized as “polarizing,” and the article leads with the purported thoughts of his critics. AP says he “angered both liberals at home and World War II victims with his hawkish push to revamp the military and his revisionist view that Japan was given unfair verdict by history for its brutal past.”

By characterizing Abe’s views as “revisionist,” his policies as “hawkish,” and Japan’s past as “brutal,” the AP writer reveals bias against Abe’s views and agendas. AP does then employ some balance, giving Abe credit for “revitalizing Japan’s economy” and “leading efforts to take a stronger role in Asia,” among other things. 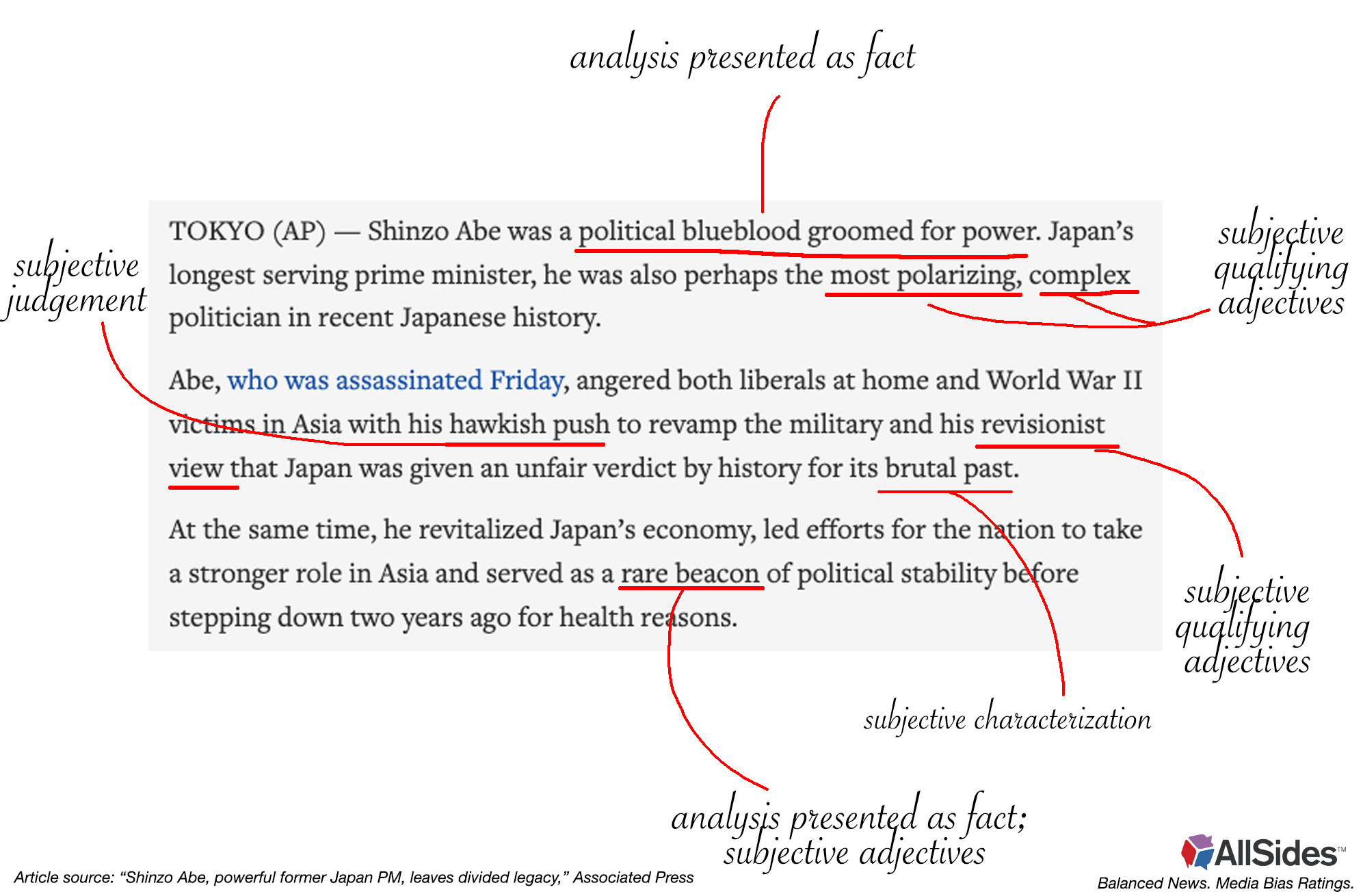 Compare this reading to the first few paragraphs of AP’s writeup on Hugo Chavez, which is perceived by many as more positive. The opening paragraphs employ slant by not focusing on any criticism of Chavez — such as the 100,000 people who died after he came to power, and the rise in violent crime under his tenure. In its leading paragraph, AP characterizes him instead as someone who “waged continual battles for his socialist ideals” and “outsmarted his rivals.” It’s not until later in the article that AP writes, "Many in the middle class cringed at his bombast and complained about rising crime, soaring inflation and government economic controls,” though AP gives no further detail about life under the leader.

Both pieces are not labeled analysis or opinion, but read like analysis. When opinion or analysis content is not clearly labeled, it can mislead the reader if they interpret it as objective fact. This is a type of media bias known as analysis presented as fact.

One of the key ways media outlets show bias is through their characterizations of politicians. An easy way to infer the worldview of the journalist is by paying careful attention to the ways they describe politicians on the left and right, and by noting whether their writeups read neutrally, favorably, or disfavorably.

When reading the news, keep an eye out for adjectives that not everyone may agree with. Ask questions such as, “Is there another perspective on this person/issue? Are there facts or information that the journalist may not have included?” Compare coverage from outlets on the left and right to get a broader view and spot bias. To make this research easier for you, we’ve developed the AllSides balanced newsfeed and media bias ratings to make different perspectives transparent.