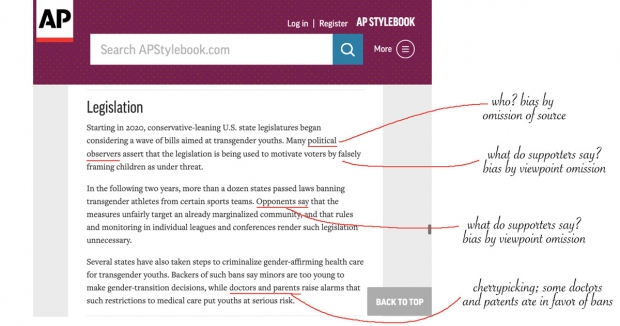 The news industry has long considered the AP Stylebook to be the gold standard or bible for journalistic guidance. But instead of telling reporters how to objectively describe both sides of controversial transgender issues so readers can decide for themselves, AP comes down on one side of the issue in its instruction to journalists.

The updated AP Stylebook guidelines on transgender issues shows types of bias such as media bias by viewpoint omission, slant, word choice bias, subjective qualifying adjectives, and omission of source attribution. AP omits alternative viewpoints on the issue, and tells reporters not to cover multiple angles — instructing them to “avoid false balance [by] giving a platform to unqualified claims or sources in the guise of balancing a story by including all views.” The result is guidance that will prevent journalists from fulfilling their role of providing an objective and even-handed view.

In its coverage guide to journalists, AP mentions recent bills in states such as Alabama, Arkansas, Florida, Ohio, Texas, and others that aim to limit or ban gender transition procedures for youth (such as mastectomies, bottom surgeries, and cross-sex hormones).

AP writes that "many political observers assert that the legislation is being used to motivate voters by falsely framing children as under threat.” By only highlighting voices on one side, AP employs bias by viewpoint omission and slant. AP appears to come out clearly against the bans, and does not mention the perspective of people who believe children are indeed threatened by such medical procedures (a perspective inherent in state bills moving to ban the procedures). When issuing guidance on how to cover a controversial issue, AP should describe the debate on both sides and tell journalists to describe the spectrum of thought, rather than only focusing on one side as if the issue is settled. 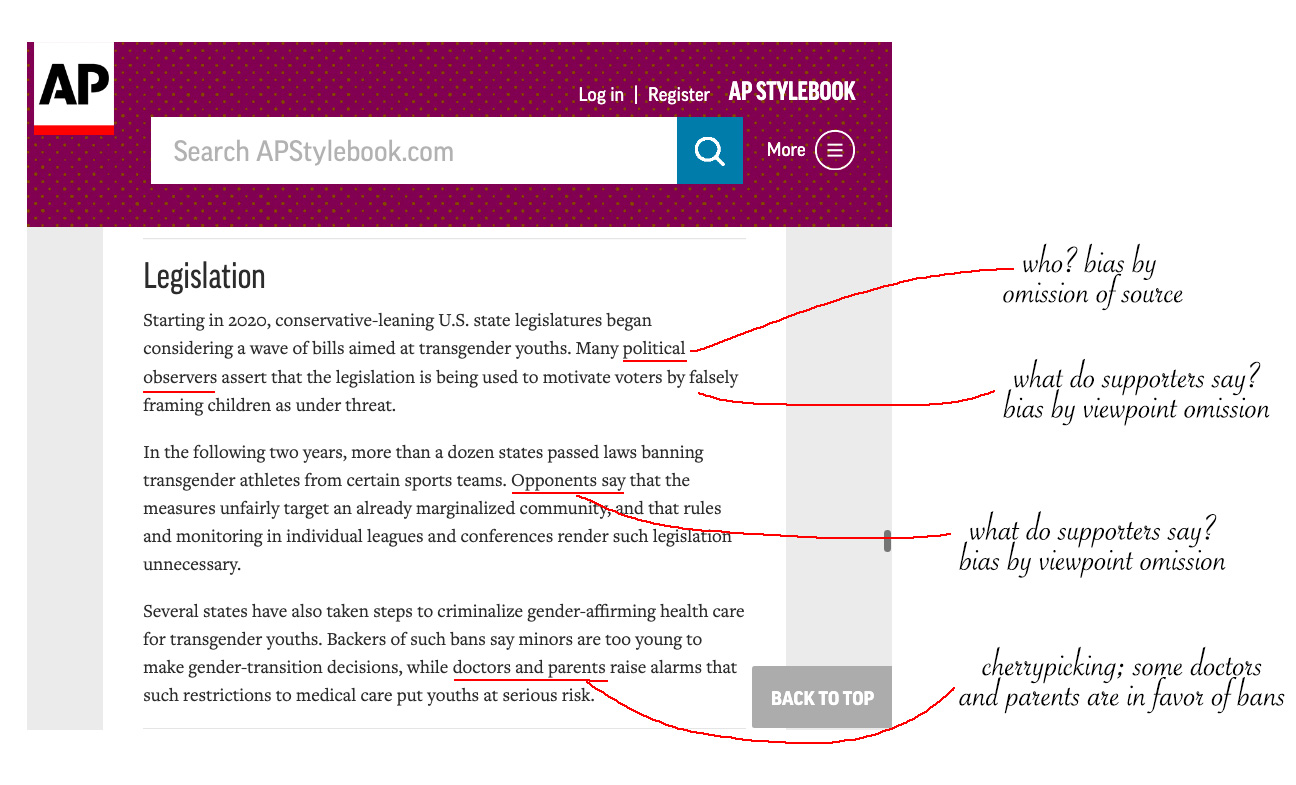 Further, by not identifying who "observers" are, AP also employs bias by omission of source attribution, which we can spot when reporters write “critics say” or “supporters say” without clearly identifying who or quoting anyone directly. This is a style guide, which is meant to be instructional, not informative, so perhaps it doesn't need these specific details. But reporters writing on these topics should know there are two sides to this issue, and the AP style guide does not convey that.

AP also employs bias by slant in this paragraph (emphasis ours):

Several states have also taken steps to criminalize gender-affirming health care for transgender youths. Backers of such bans say minors are too young to make gender-transition decisions, while doctors and parents raise alarms that such restrictions to medical care put youths at serious risk.

AP again commits bias by viewpoint omission when it mentions the World Professional Association for Transgender Health’s recommendations on the minimum age for starting gender transition treatment. By appealing to only one institution, AP omits that other institutions have taken a different view — such as the University of Texas Southwestern Medical Center, which stopped providing cross-sex hormones to children, citing “growing concern in the medical community about our limited understanding of the long-term effects – both psychological and physical – on children who receive this treatment” and stating “there have not been controlled trials that have clearly delineated the effectiveness and safety of these treatments.”

By only highlighting one institution on this controversial issue, AP does not allow journalists to fully understand that there are two sides, or instruct them to present different perspectives in their reporting. 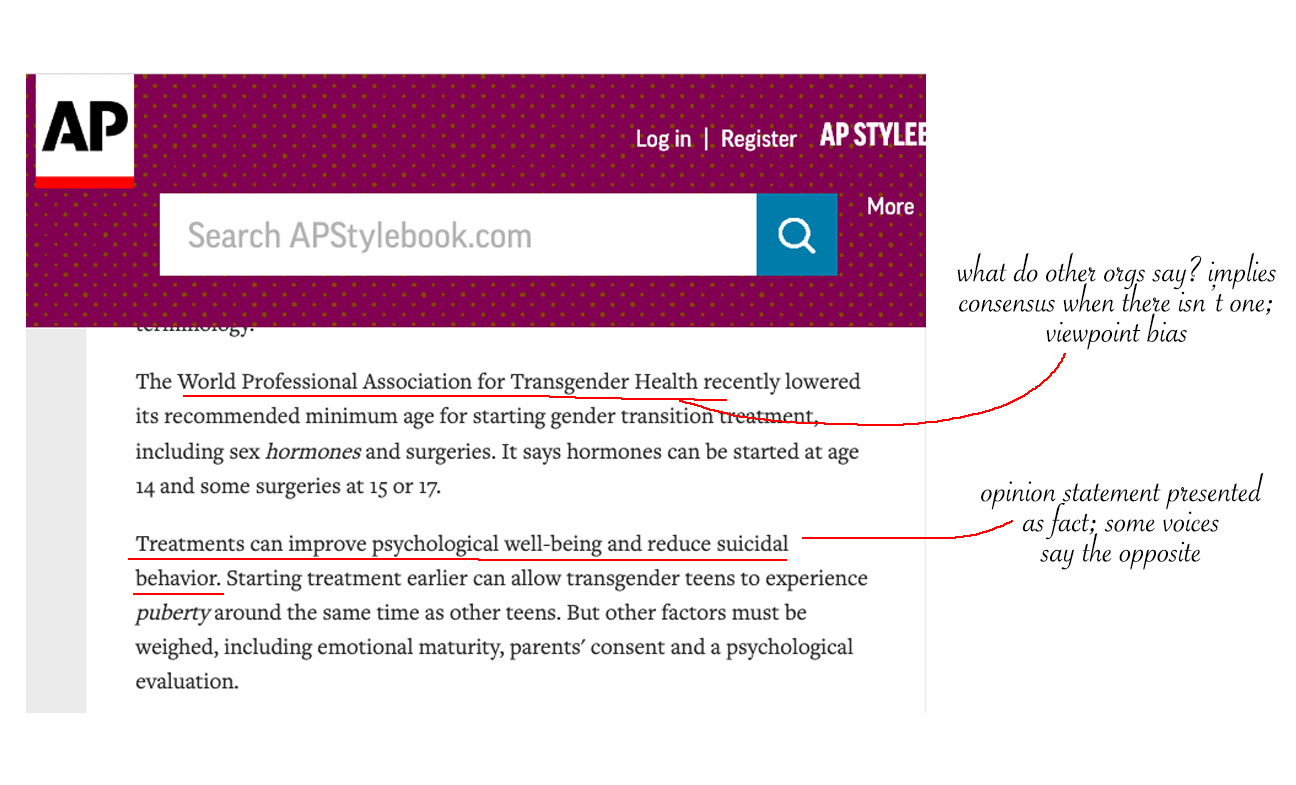 AP Unspecific About Which Sources to Trust

AP’s transgender guidelines tell journalists to "avoid false balance [by] giving a platform to unqualified claims or sources in the guise of balancing a story by including all views.” Further, AP tells reporters not to quote anyone on this issue "unless they have the proper background.”

AP doesn't specify how it defines "proper" or "unqualified.” This is a type of media bias known as subjective qualifying adjectives — when a journalist uses descriptors that are subjective in nature and sit in the realm of opinion.

Qualifying adjectives are often a point of serious disagreement among the left and right. For example, while one person may argue the CDC is a trustworthy authority on COVID-19 health measures, another may argue they are an untrustworthy authority. Both sides could issue commentary and point to examples backing up their claims that the CDC is worthy of trust or not worthy of trust, but the final verdict will always sit in the realm of subjective opinion. By not explaining what criteria makes a source “unqualified” or a background “proper,” AP relies on vague, subjective judgements.

Finally, the AP Stylebook says that if anyone the journalist is quoting says LGBTQ education at a young age is "grooming," the reporter must state that this is false, instead of letting the reader decide about it for themselves. AP writes: "Do not quote people using the term [groom] in this context without clearly stating it is untrue." This is a type of bias known as an opinion statement presented as fact. When journalists issue a truth claim on a subjective opinion, instead of quoting both sides and letting you decide for yourself, they commit this type of bias.

“Grooming” means very different things to liberals and conservatives, which AllSides explains in our Red Blue Translator, and there is open debate going on about what constitutes or does not constitute grooming. For AP to issue a judgment call on this issue is for them to take a stance, instead of just objectively describing the viewpoints being expressed on both sides — which is the role of a journalist.

AP shows word choice bias when it instructs writers to “avoid terms like biological male,” which it says is “often misleading shorthand for assigned male at birth.”

Some voices disagree that gender/sex is “assigned” at birth, arguing instead that it is “observed” or “recorded.” “When a doctor records “male” or “female” on a birth certificate, they are recording an infant’s biological sex that has been assessed by an inspection of their genitals and occasionally corroborated with chromosomal evidence,” writes evolutionary biologist Colin Wright.

Meanwhile, others argue that the term “assigned” is the proper term. Planned Parenthood writes that this term is better because it “acknowledges that someone (often a doctor) is making a decision for someone else. The assignment of a biological sex may or may not align with what’s going on with a person’s body, how they feel, or how they identify.”

By choosing the term “assigned at birth,” AP shows it aligns with one side of this issue.

As society debates transgender medical procedures and other related issues, more neutral writing guidelines on this issue would have encouraged journalists to seek and showcase voices on multiple sides, from multiple institutions, and from multiple perspectives.

The Associated Press Stylebook has been around for over 150 years, and its standards are reflected in media content across the globe. Students in journalism schools are taught to follow its standards. But since 2018, AllSides has noted Associated Press content moving toward the left. The same tilt shows in this new AP style guidance.

When media outlets only highlight voices on one side or treat subjective opinion statements as fact, it prevents us from getting the full view and making up our minds for ourselves.

AllSides doesn’t tell you what to think — we highlight multiple perspectives on hot-button political issues so you can avoid media manipulation, know more, and decide for yourself.

Julie Mastrine is AllSides’ Director of Marketing and Media Bias Ratings. She has a Lean Right bias.