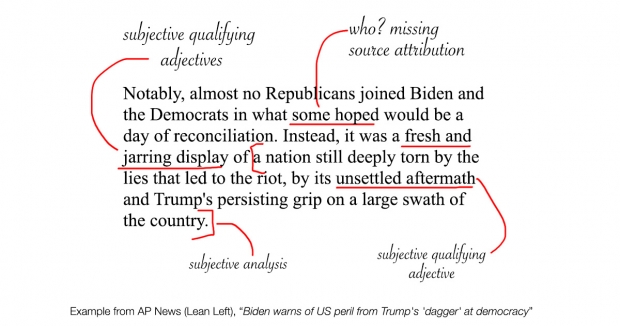 We recently added subjective qualifying adjectives to our resource guide about 12 Types of Media Bias. A recent example of subjective qualifiers was found in an AP news (Lean Left) article, which we highlighted on our Instagram page below.

The topic has led some (including those internally at AllSides!) to argue that using adjectives is acceptable, because it can help a journalist to paint a clearer picture of what really went on. But the core point is that qualifying adjectives are subjective in nature, and may be a point of serious disagreement among the left and right.

For instance, you may agree that Kamala Harris “forcefully slammed” her opposition in a statement, or you may disagree that her comments warrant such intense language. To give another example, someone who is in favor of limiting abortion would likely not agree with a journalist who characterizes new laws restricting the act as a "disturbing trend." Or, to give a non-political example, you may agree with a journalist who writes that a 15 degree day in Alaska is a “beautiful day,” or you may disagree, and see such a day as quite terrible and bleak!

The core point is that it's important to be aware of subjective qualifiers and adjectives so that you can be on alert and then decide for yourself whether the descriptor should be accepted or not. It is important to notice, question and challenge adjectives that journalists use so that you are not manipulated or misled. 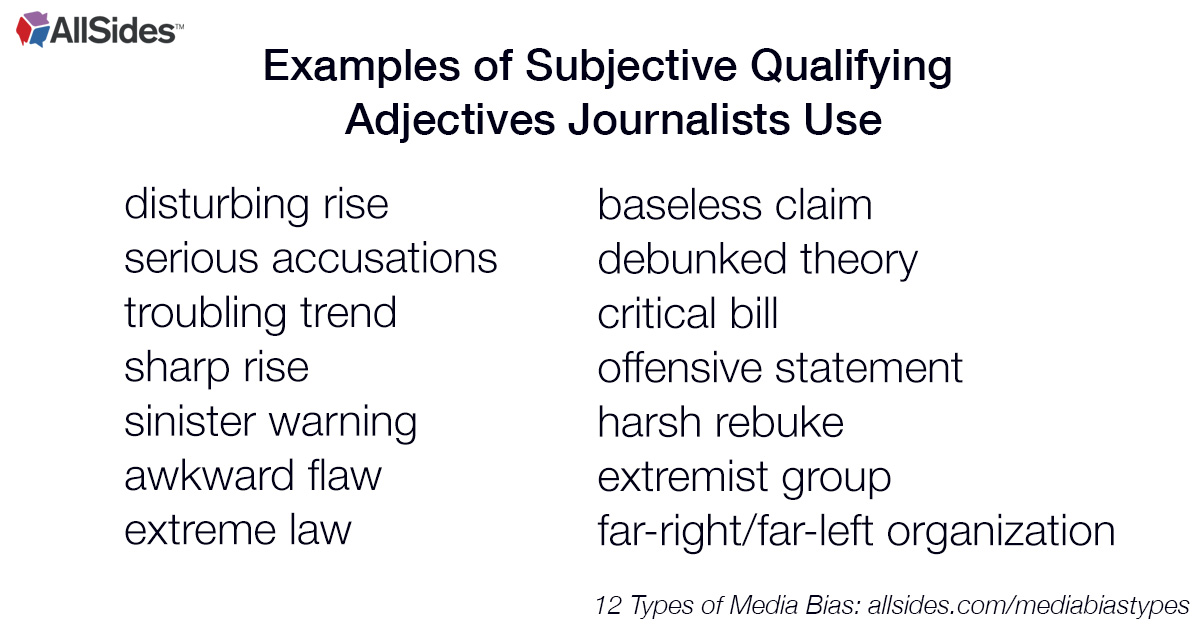 While it’s debatable as to whether journalists should always avoid adjectives (though I’d personally advise avoiding using them in straight journalistic writing that is not meant to be analysis or opinion), their use is almost always going to represent an interpretation, and thus, be subjective in nature. Adjectives do indicate bias — even if the descriptor is not one you’d deem unfair, it indicates a viewpoint. That’s why being able to spot the use of adjectives in journalistic writing is important. While a journalist may use an adjective that you would deem fair or accurate, sometimes they don’t — and the resulting bias can manipulate someone’s view.

One of the best recent examples I’ve seen of this is media coverage that calls Jan. 6 a “deadly riot,” or states that there was a “deadly assault” on the Capitol. People on the left typically accept this characterization, while people on the right do not, as they argue that only one person was killed that day (Ashli Babbitt, shot by Capitol Police). They object to describing the event as “deadly” because it implies the rioters killed someone when they did not; they see the use of the phrase as manipulative. However, people on the left argue that “deadly” is a fair descriptor, since someone died in the chaos. The left also speculates that Officer Brian Sicknick’s death by stroke a day later had to do with the riot (initial reports that he was beaten by a pro-Trump mob turned out to be false).

Familiarize yourself with the 12 Types of Media Bias, and always ask questions when reading the news. It can mean the difference between being manipulated and deciding for yourself.