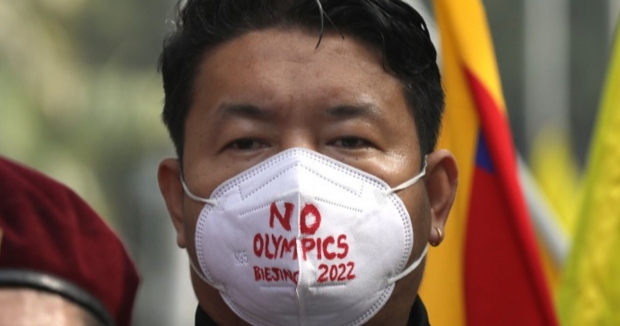 As the U.S. watches its athletes compete in the 2022 Beijing Olympics, political controversies regarding China have earned just as much attention.

The 2022 Winter Olympics began last Friday in Beijing. As of Thursday morning, the U.S. ranks third in medals with 10, and tied for second in first-place finishes with four. Far fewer people in the U.S. are watching compared to past years; coverage of the opening ceremonies averaged 12.8 million viewers, down from the 27.8 million average at 2018's Winter Olympics.

While some coverage focuses on the athletes and competition, many other voices — especially on the right — criticize the Chinese government, its handling of the Olympics, its record on human rights and more. Some on the right painted the low TV ratings as proof of viewers' dissatisfaction with China. Some on the left argued that China will benefit regardless of the world's reaction to the Games. Some right-rated outlets framed American-born athletes who are competing and winning medals for China as having "sold out"; some left-rated voices said that framing was overly nationalistic. Many right-rated voices also accused NBC's Olympics coverage of bias for purportedly ignoring controversy about China.

In the ‘Genocide Olympics,’ Are We All Complicit?

"Besides the Chinese government itself, perhaps no other entity has received as much blame for the compromised moral status of these Olympics than the International Olympic Committee. In recent years, the I.O.C. has come under fire for awarding the Games to authoritarian countries, like Russia and China, precisely because they can suppress domestic opposition."

"While so much of the discourse around Gu here in the United States focuses on the politics, her citizenship and what she should or should not be discussing, in China, a teenager is being appreciated for her extraordinary athletic accomplishment and is rapidly becoming one of the biggest sports stars in the country. For the moment, that is the real story."

Why Americans are turned off by the Olympics

"There's widespread concern about the human rights abuses in China, and broad support for the U.S. diplomatic boycott — 73% approve of the policy. But the poll also found deep skepticism that the boycott will matter, with 74% saying it will make no difference in the Chinese government's approach to human rights."

"Through the first four nights of competition, NBC is on track for the lowest-rated Winter Games in history. Friday night’s coverage on NBC, USA Network and Peacock averaged 12.8 million viewers, significantly down from the 27.8 million average in Pyeongchang four years ago. Thursday night’s audience of 8 million marks the smallest primetime Olympics audience on record, surpassing the 9 million that tuned in for the closing ceremony of the Tokyo Games."

"When it became clear that the government could not protect the safety and privacy of our athletes, thanks to the Biden administration’s inaction and incompetence, the president should have announced a total and complete boycott of the games. He should then have rallied the rest of the world to follow America’s lead, as it so often has. Instead, Joe Biden folded."

Eileen Gu, an American-Born Skier Who Sold Out to China, Wins Gold for Xi Jinping

"The secret behind her massive wealth is that Gu switched from representing the United States to representing China in 2019 at the age of 15. That opened the gates to a market with few winter-sport athletes with whom to compete. It also gave her the opportunity to possibly receive payments from the communist government — which is known to reward athletes, especially Olympians, who succeed in representing the country. "