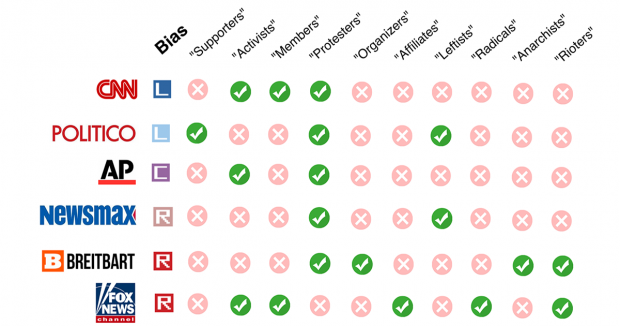 People have very different perceptions of the “antifascist” or “Antifa” movement or group. Media bias is often seen in how this movement or group is covered. How media outlets stylize references to Antifa can convey their position on whether it is a formal movement or group, or just an idea.

An indication of media bias is whether outlets capitalize “Antifa” or not in stories. (For the purposes of this blog, AllSides will alternate capitalizing and not capitalizing Antifa). We found through our analysis that outlets rated on the left overwhelmingly stylized the word as “antifa” with all lowercase letters, while a majority on the right capitalized the first letter “Antifa” in reporting. Notably, Newsmax (Lean Right) also sparingly stylized the word as “ANTIFA” in all caps.

This is because some believe Antifa is a formal activist (or even domestic terrorist) group operating in America, while others argue antifa is not organized and is merely an idea. 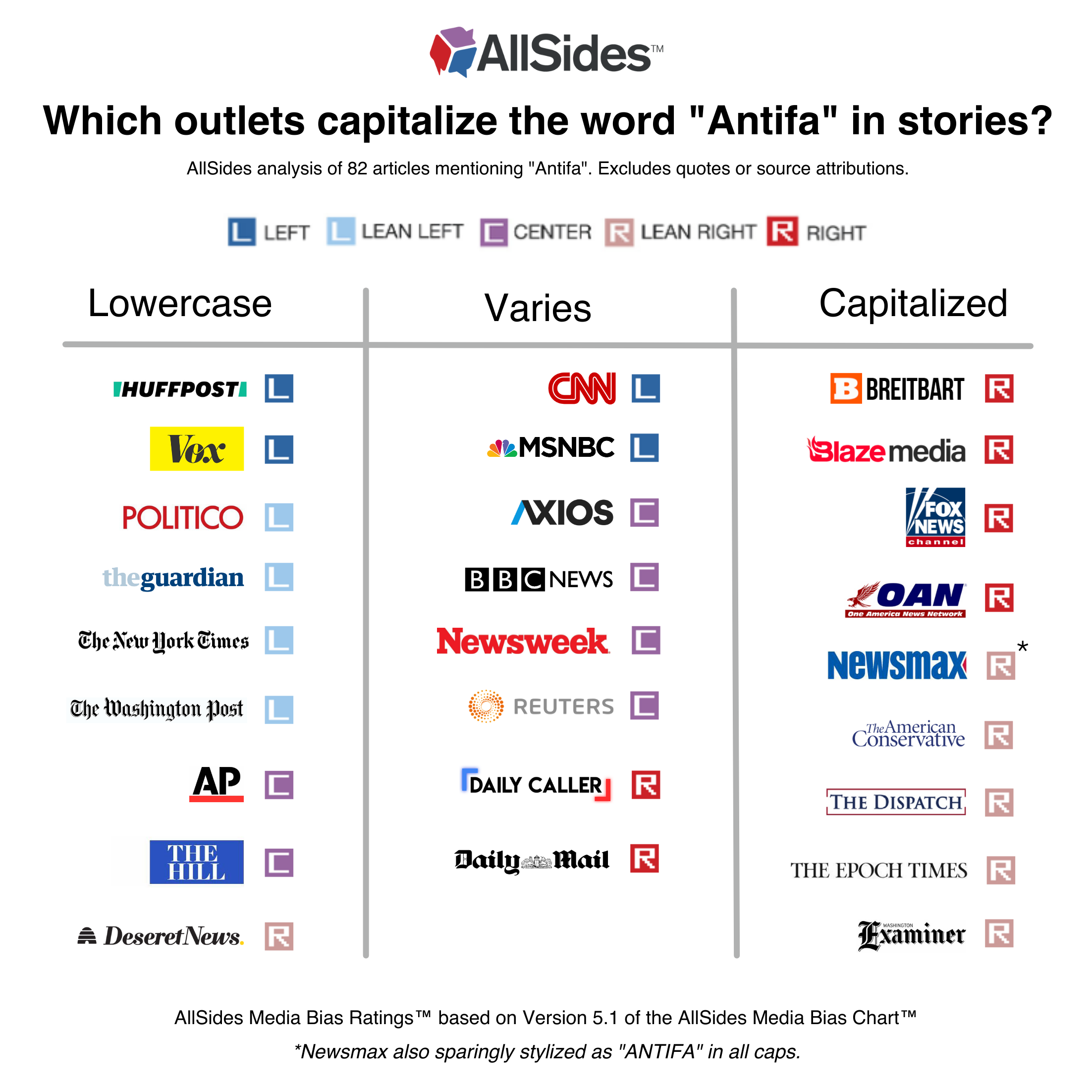 Outlets on the right are also more likely to cover Antifa in general, while outlets on the left and Center oftentimes only mention the name in relation to the Jan. 6th Capitol Riot – usually in an effort to debunk claims that antifa did not disguise themselves as Donald Trump supporters to cause chaos.

Partisan news outlets often use different terms to describe antifa. For example, we found that outlets on the right used a handful of negative words not seen on the left – such as “rioters”. 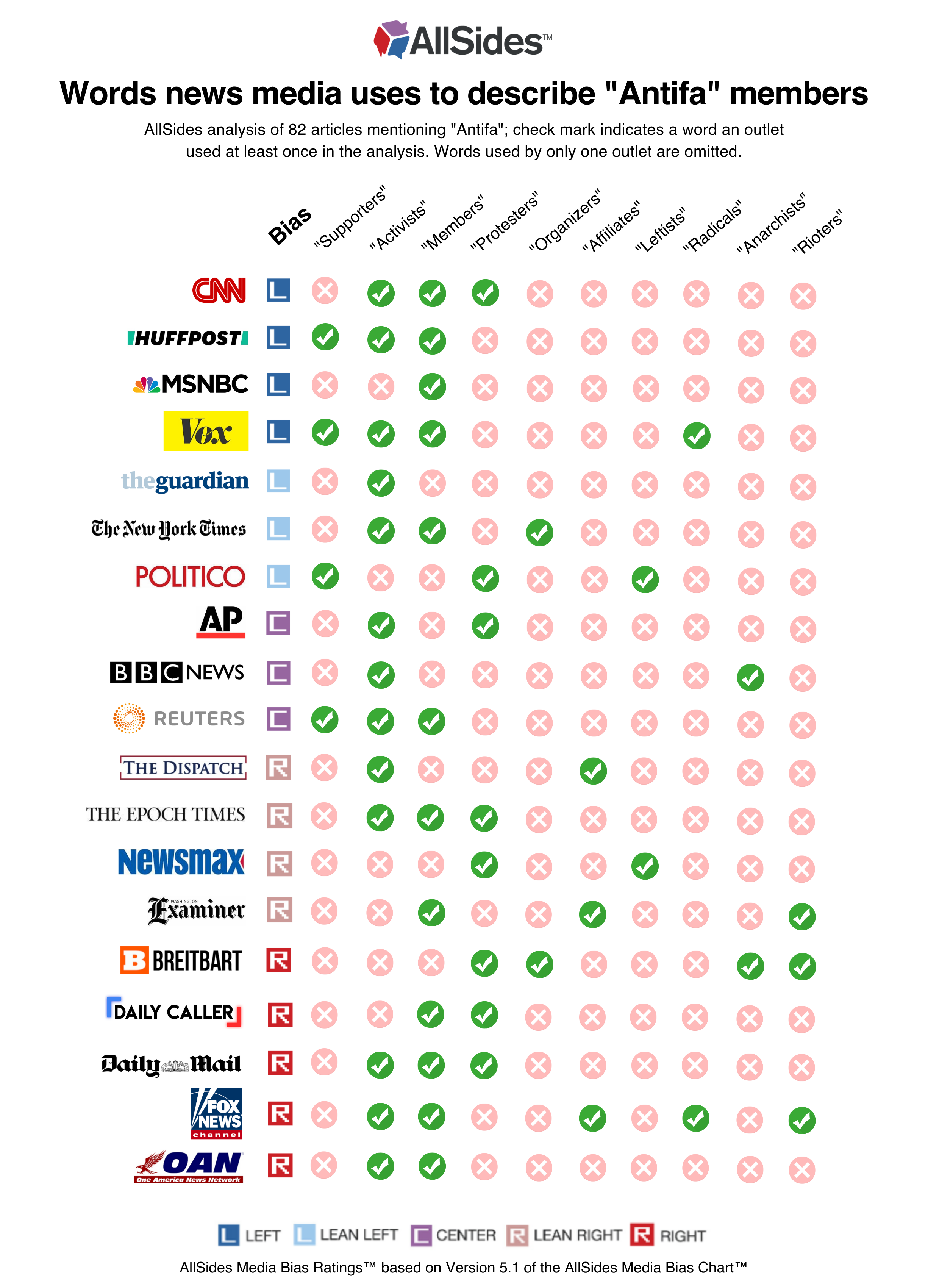 BBC News (Center) describes antifa as “a loose affiliation of mostly far-left activists.” It continues, “They include anarchists, but also communists and a few social democrats. What sets them apart is their willingness to use violence.”

Mark Bray, the author of Antifa: The Anti-Fascist Handbook, defined Antifa – or “Militant anti-fascism” – as “a pan-radical-left politic of direct action against the far right” in an interview with AlterNet (Left). The outlet claims that “Antifa is a label, used by those following a guiding principle oriented against all forms of fascism, racism and white supremacy.”

FBI Director Christopher Wray told lawmakers in 2020 that antifa “is a real thing” but that it is “not an organization or a structure… more of a kind of a movement… an ideology.”

The way in which a word is used can give away some of its true intentions. The Guardian (Lean Left), for example, says, “Put simply: antifa does not really exist as a distinct entity.”

On the other hand, outlets on the right convey that Antifa is a more formal, yet decentralized network of organized activists. The Epoch Times (Lean Right) consistently calls the movement the “far-left Antifa network," communicating that Antifa is made up of organized groups of activist cells. The Dispatch (Lean Right) argues that Antifa is a “formal organization” in Portland, Oregon, and other areas, since they have a “public website, leadership structure, and network.” Newsweek (Center) has referred to Antifa as having “cells.”

Journalist Andy Ngo (Lean Right), who wrote a book on Antifa titled Unmasked, told the Washington Free Beacon (Right): "Antifa is an ideology. It’s amorphous—that is difficult for the average person to understand. There’s another whole structure to Antifa that includes working in the legal, democratic system by systematically mainstreaming tenets of the ideology. The fact that they are decentralized and anonymously organized gives them deniability."

Read more about Antifa on AllSides, and read our balanced newsfeed to understand how outlets are covering the issues differently.

AllSides conducted this analysis of 82 articles from outlets in the AllSides Media Bias Chart™. We looked at a maximum of three prominent articles mentioning Antifa in the headline of the article. All articles were published between 2017 and 2022. We did not look at the number of times an outlet used individual terms.

Andrew Weinzierl is the Research Assistant & Data Journalist at AllSides. He has a Lean Left bias.