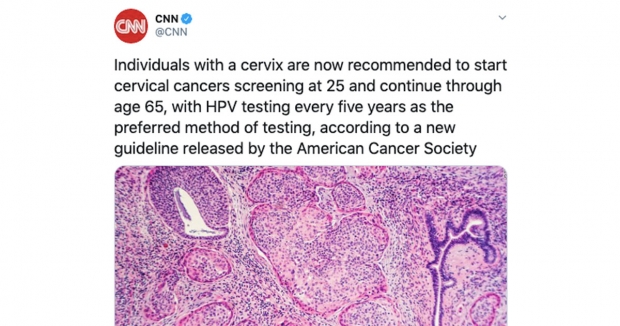 CNN shared an article on Twitter July 30 about the American Cancer Society’s recommendations for cervical cancer screenings. CNN wrote the caption, “Individuals with a cervix are now recommended to start cervical cancers screening at 25 and continue through age 65, with HPV testing every five years as the preferred method of testing, according to a new guideline released by the American Cancer Society [sic]”

The tweet garnered thousands of replies, including backlash from readers who accused CNN of anti-women bias and erasure of women by describing them as “individuals with a cervix” instead of “women.”

Others argued that not using the term “individual with a cervix” would amount to anti-transgender bias, purportedly erasing those who were born with female biology and now identify as men.

The tweet underscores just one hot-button issue around gender and biology that has swirled for years in the U.S. culture war — defined as the ongoing contest between “Progressivism” (liberal-secularist convictions) and “Orthodoxy” (conservative-traditionalist conviction). Some (mostly on the right) argue only women can have a cervix; Some (mostly on the left) argue men can have them, too.

AllSides explains the phenomenon in our Red Blue Dictionary, “Progressives and conservatives disagree not about the term [transgender] itself, but about the normative nature of transgender. Most progressives see transgender as a normal, value-neutral variation typical of the human species, like variations in skin color or height. Many celebrate the idea of transgender identity, and say it helps to break down traditional ideas of gender that they say have oppressed and restricted millions throughout history.

“In contrast, some conservatives see transgender identity as a psychological disorder; in this they align with a definition touted until 2012 by the American Psychological Association. Some claim that internal feelings and experiences are not sufficient to determine human identity, and external factors must also be taken into account. For religious conservatives in particular, transgender identity represents a violation of the two divinely ordained genders: male and female.”

CNN’s tweet is an excellent example of how apparent attempts at unbiased neutrality become biased political positions in today’s landscape. It also underscores the continued battle over the moral and philosophical grounds of what used to be widely-accepted orthodoxy, such as what makes a man and a woman. At the same time, Twitter is a battleground for the most hotly contested issues, and may give an inflated view of Americans, who may be far more moderate than social media would portray. Yet as media outlets take sides and Americans appear to agree on less and less, it makes it even more important to carefully consider both sides to find the truth and decide what you think for yourself.