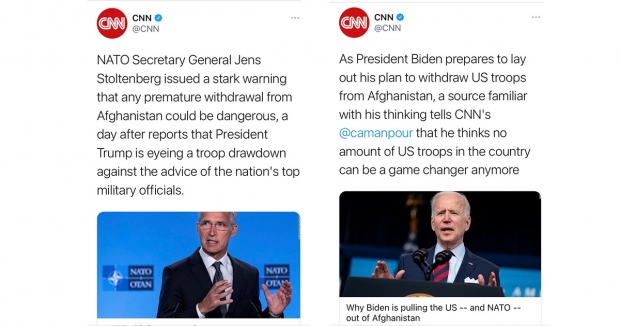 On April 14, President Biden announced his intention to end the war in Afghanistan. In 2019 and 2020, President Trump also said he would withdraw troops.

It should be noted that Holden primarily highlights coverage from media outlets rated Left, Lean Left, or Center by AllSides: CNN (Left), The New York Times (Lean Left), MSNBC (Left), TIME (Lean Left), The Washington Post (Lean Left), NPR (Center), PBS News House (Center), and ABC News (Lean Left). AllSides has not analyzed right-wing media on this issue, so bias from that side of the spectrum on this story may be missing. Still, we found this thread worth sharing with our readers to help you learn how to spot media bias.

The most common type of media bias that Holden caught here is slant, which is when journalists tell only part of a story, or when they highlight, focus on, or play up one particular angle or piece of information. It can include cherry-picking information or data to support one side, or ignoring another perspective. Slant prevents readers from getting the full story, and narrows the scope of our understanding.

Did you spot any right-wing media bias on this topic? Is this a fair analysis, or the wrong comparison to draw? An AllSides team member with a Lean Left bias said the Trump and Biden troop withdrawals were substantively different, which should complicate any effort to compare the two. What do you think? Give us feedback.

When Trump said we were leaving, @CNN quoted the NATO Sec Gen with a “stark warning” about how “dangerous” the move would be.

But Biden’s decision? Well, on that one, we just get to hear from his people. pic.twitter.com/b8KHDPNrmN— Drew Holden (@DrewHolden360) April 14, 2021

For Trump, we hear about the “fears” of Afghan officials from @nytimes.

Biden, on the other hand, gets a sympathetic write up despite being the second most powerful man in the country during the height of US forces. Just incredible memoryholing here. pic.twitter.com/2vu2GdBqxR— Drew Holden (@DrewHolden360) April 14, 2021

So much of today’s coverage reads as if nothing had ever been said to the contrary by anyone on @MSNBC pic.twitter.com/qSNnMg0k09— Drew Holden (@DrewHolden360) April 14, 2021